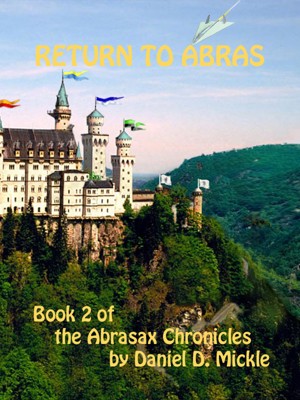 By Daniel D. Mickle
Over 71,000 years ago on a kingdom planet on the far side of the galactic core, a young queen left a spaceship in sealed storage for its future crew, a group of humans who would come from a distant planet called Earth. Under orders by the highest ranking leader on the planet, the ship dutifully waited. More
How do young witches and wizards find themselves on an alien planet?
RETURN TO ABRAS, Book 2 of the Abrasax Chronicles series is an uncommon blending of science fiction
and fantasy. Should you wear a pointy wizard's hat or strap on a blaster? Hold onto your magic wands and laser pistols;
—you are in for a rare treat. It may all sound too unbelievable, but the way the series is written, I think you will agree that it is presented in a logical and plausible manner. Check it out...!

Daniel D. Mickle has written technical articles in the sciences plus science fiction stories for over half a century, beginning in high school with his school newspaper, where he wrote stories for the enjoyment of the other students. His varied interests range from quantum physics theory, communications, electronics design, work with lasers and microwave radio (lifetime federal license), computers, astronomy, chemistry, and the internet to building robots, riding his Harley, martial arts (multiple black belts), marksmanship (expert), writing, oil painting, and photography (to mention a few) give him a perspective on life which may be seen in the varied aspects of his stories. A stickler for detail, he makes certain the science involved in his fiction is either the latest views in the scientific community, or are his own interpretations and projections of logical science discoveries coming in the future.

You have subscribed to alerts for Daniel D. Mickle.

You have been added to Daniel D. Mickle's favorite list.

You can also sign-up to receive email notifications whenever Daniel D. Mickle releases a new book.