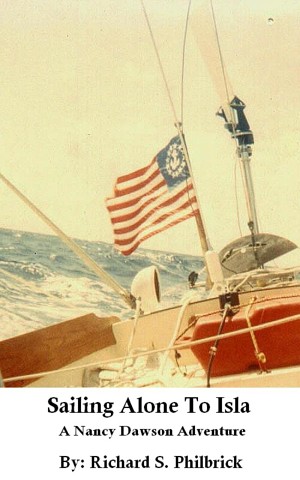 By Richard Philbrick
Rated 4.67/5 based on 3 reviews
A single-handed voyage on a small sailboat from Key West Florida to Isla Mujeres, Mexico.

Raised on Cape Cod. Lived in New Orleans for 10 years and left long before Katrina. Worked as a newspaper reporter, magazine editor, hospital public relations director and freelance writer before chucking it all and following my bliss which was to work on boats. Became a Coast Guard Licensed captain and worked for 20 years running yachts and small commercial craft including a three year stint as captain of a large sailboat on the French Riviera and sailing across the big pond in '91.

In my own small sailboat I single-handed from Fort Lauderdale to Mexico, Belize and the Rio Dulce in Guatemala and back.

For those of us who have sailed enough to know that it takes a certain amount of commitment to master the art, Sailing Alone to Isla is proof of that concept. His preparation for whatever might come up was surpassed by his description of reasoning through a "situation" and solving the dilemma. His descriptions of the journey, the skies, sea, and especially the sea life--make this read real.

(reviewed 2 days after purchase)
Dave Perfent reviewed on May 27, 2012

As a sailor, I loved this account. If you have never sailed, you will feel like you have. His use of maritime jargon adds delicious flavor to the story so if you don't understand every word just let it wash over and enjoy the ride. I feel fortunate discovering this author. Mr. Philbrick, where have you been?

I was fortunate in meeting Richard S. Philbrick in person one lazy afternoon in Panama City. We had exchanged comments on my blog and it was the first time of meeting the man in bone and flesh.

We went to a nearby park and started with small talk about Panama, then Richard started telling me stories about his stay in a small town in France called Antibes and his girlfriend Florence.

Last week I finished reading his book, "Despair! The Ill-Fated Fourth Voyage of the Admiral of the Ocean Sea". It was a wonderful experience, since I'm inclined to History-oriented literature. I savored the book like drinking good aged wine.

Last night I finished reading another one of Richard's digital books, "Sailing Alone to Isla: A Nancy Dawson Adventure". It was a small book that you can finish in a wink of an eye. Mostly it's about the experience of a sailor aboard a small sailing boat traveling from Key West in Florida to Isla Mujeres in Mexico. In Richard's own words, the journey covered 355 nautical miles at 2.13 knots per hour or 2.44 mph in an automobile. After sailing six days and 12 hours he arrived at Isla Mujeres in Mexico as scheduled. He was 50. What a way to celebrate a birthday.

The book is full of technical sailing terms that were kanji characters to me, (e.g., dowsed the jib, vang, dodger, zephyr, genoa, genny and so on). I developed calloused fingeres pressing the dictionary button, but I wanted to know exactly what Richard was doing on his beloved Nancy Dawson.

I love Richard's writing style. Direct, and to the point, without beating around the bush. The descriptions of the scenes are amazing. His narratives are better than a real photograph; they are that detailed and descriptive.

This is a taste of his writing style on this book: "As night closed in and the sun left a gold and crimson trail across the glass tabletop of the sea, I was pleased there were no lights aside from the millions of stars in the sky, and I plowed straight ahead."

I was taken off by the sudden change of the font sizes. They went from normal to big and back to normal again. I thought I needed a new pair of glasses, but maybe it's a mistake made by the publishers. It should be corrected.

For your information, I used Kindle for PC application to read Richard's digital book.

Richards feel like a fish in the water when sailing a boat anywhere on the globe. He worked for 18 years as a U.S. Coast Guard-licenced captain on yachts and small commercial and another 15 fixing and painting them.

He grew up in Cape Cod and is now retired living in the Republic of Panama.

If you like sailing and enjoy the ocean, you will appreciate this book written by Richard S. Philbrick. There is one big problem with this book, I would not leave out of this review---the book was too short.

I'm looking forward for another book from this sailor now living on mainland. I think he's working on one even as I write this review.

(reviewed 29 days after purchase)
Don Williams reviewed on Jan. 28, 2011
(no rating)
Interesting read. It would probably be of more interest to an person with some knowledge of the sea.

One thing I didn't like was that there were several font size changes and I don't think they were intended.

You have subscribed to alerts for Richard Philbrick.

You have been added to Richard Philbrick's favorite list.

You can also sign-up to receive email notifications whenever Richard Philbrick releases a new book.