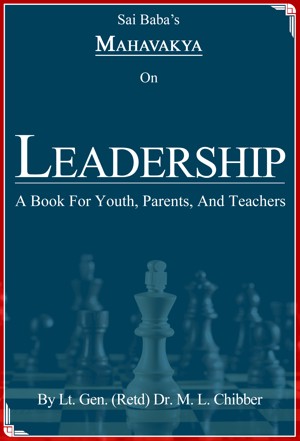 By Lt. Gen. (Retd) Dr. M. L. Chibber
Nations are made or marred by the calibre and moral character of their leaders. Here is a timely book, which tells the world how to re-establish leadership inspired by idealism. We recommend Moon Reader app for viewing the .epub book. More
THE ETERNAL TRUTH ABOUT LEADERSHIP

"Nations are made or marred by the calibre and moral character of their leaders. Here is a timely book, which tells the world how to re-establish leadership inspired by idealism."
– V.K. Narasimhan,
Former Chief Editor, Indian Express

"The author's uncomplicated directness and crisp examples capture the imagination and curiosity of the most seasoned executives as well as young sceptics. The book delivers a passion for leadership through the lens of conceptual clarity. Excellent reading for leaders and those who want to be."
– Wayne L. Strom, Ph.D., Professor of Behavioral Science,
School of Business And Management, Pepperdine University, California

"This book can help to integrate and revitalise the American society for its world leadership role."
– Dr. William M. Harvey, USA

"On behalf of the Director-General of UNESCO, I acknowledge receipt of Mahavakya on Leadership. We appreciate the book as a useful resource material which will inspire UNESCO's activities on education for peace, human rights, democracy, international understanding."
– Andri Isaksson,
29th November, 1995

We recommend Moon Reader app for viewing the .epub book.

Born in August, 1927, the author hails from the Northwest Frontier Province of undivided India. His 40-year career in the army culminated as the commander in chief of India’s Northern Command, personnel deployed in eyeball-to-eyeball contact in a “no peace, no war” confrontation with China and Pakistan. He masterminded the operation to pre-empt Pakistan from capturing Siachen Glacier.

After retirement, he served as Executive Director of the Management Development Institute, New Delhi, for four years (1986-89). He also served on the Board of Studies for M.B.A. of the Sri Sathya Sai Institute of Higher Learning (deemed university) for seven years.

A graduate of the British Army Staff College, Lt. Gen. Chibber has an M.Sc. from Madras University and a Ph.D. from Allahabad University. Is a fellow of the inter-university Seminar on Armed Forces and Society, Chicago; Jawaharlal Nehru Fellow researching the introduction of national service in India; and Fellow of Arms Control, Disarmament and International Security, University of Illinois, Urbana. He has authored many books and numerous monographs and articles on leadership and matters related to security, war, and peace.

1. Military Leadership to Prevent Military Coup, based on his Ph.D. thesis.

3. How to Be a Successful Leader, (fifth reprint).

6. Chapter on “The Quest for Security” in Indian Foreign Policy – The Indira Gandhi Years.

10. Co-author of Indian Army ARTRAC manual on LEADERSHIP, based on Sai Baba’s Mahavakya on Leadership.

You have subscribed to alerts for Lt. Gen. (Retd) Dr. M. L. Chibber.