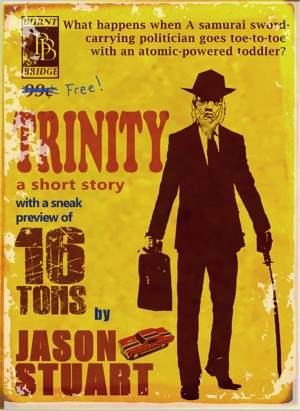 By Jason Stuart
A SHORT STORY

Mary-Alice is literally raising her son in a barn, a toddler nearly as strong as a grown man. As he threatens to eat her further into the poor-house, her should-be husband is too busy racing hot rods and terrorizing policemen to even notice his son is off-kilter. But, an encounter with a Politicking War Vet with a Ninja sword throws her whole world even further off balance.
Download: epub mobi (Kindle) pdf more Online Reader
rtf lrf pdb txt
Price: Free! USD
Add to Library
Create Widget
Tags: superhero samurai
About Jason Stuart

Jason Stuart more or less was raised in a barn. He grew up eating squirrel meat and moon pies. He once jumped over a rattlesnake while winning a foot-race against a giant. He picked peas, potatoes and corn by the bushel every morning most of the summers of his young life and spent the rest of the afternoon shucking and shelling. He loaded chemical fertilizer for a while until his foot turned yellow and he quit (though he still doesn’t care a jot for organic agriculture). He’s driven a truck (poorly, he might add), washed dishes, tended bar, cleaned up bars, poured concrete, built houses, run a movie house, served process, worked cattle, and, at times, lived in his truck (1995 Chevy Tahoe 4 door 4x4). He once had to arbitrate a gunfight regarding ownership of a chainsaw during the aftermath of a hurricane. Somewhere along in there, he went to college, the particulars of which are not terribly interesting. Alcohol was involved. He now resides on the beach in Mississippi and works on an Air Force base, though he is not, himself, an airman. He has several lawyers but still no agent. He rides a motorcycle and roots for the Gators. He has not, as of this writing, shot a shark with his .357

You have subscribed to alerts for Jason Stuart.

You have been added to Jason Stuart's favorite list.

You can also sign-up to receive email notifications whenever Jason Stuart releases a new book.