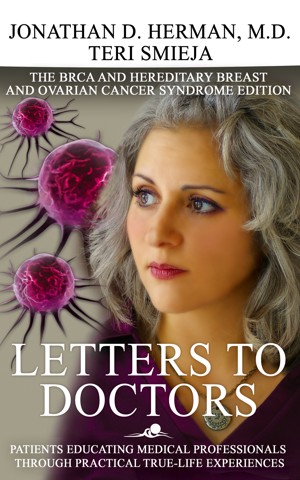 Through more than 547 lectures, meetings and media appearances Dr. Herman has taught both the science and the practical application to physicians and their ancillary personnel. Speaking forums have included grand rounds presentations, resident didactic lectures, community based events, as well as dinner conferences and lunch meetings. He is a frequent featured physician at women’s health day events.

Past topic titles have included:

Dr. Herman appeared on the hit show, “The Doctors” with two of his BRCA positive patients and currently has three public service announcements showing on ten TV stations across the US.

The website, Learnabouthboc.com, features these media clips, Dr. Herman’s story and additional resources for both those in healthcare and the public.

Is there breast or ovarian Cancer in your family?

"Tell your doctor what's in your family history
..... It just may save your life!"

You have subscribed to alerts for Jonathan Herman &amp; Teri Smieja.

Would you like to favorite Jonathan Herman &amp; Teri Smieja?

You have been added to Jonathan Herman &amp; Teri Smieja's favorite list.