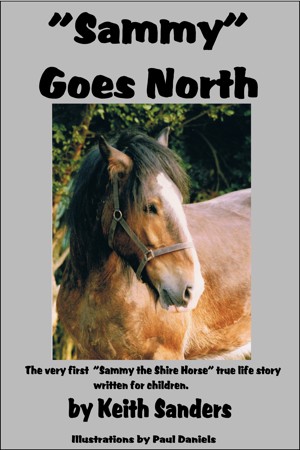 By Keith Sanders
Sammy leaves his job at a London Brewery and heads for a new life in the countryside. More
"Sammy Goes North"; a short story for children. The first in the "Sammy the Shire Horse" Series of stories for children. These are all true stories that really happened.
Here, in this first story, Sammy leaves his regular job at a London Brewery and goes to live in the countryside with his working partner Ebony who is retiring from regular work.

Keith Sanders, a ‘Yorkshireman’ was nominated in the 1990’s for an entry in the Martin Miller reference journal ‘BEST OF BRITISH MEN’.
Keith is an authority on the behaviour of animals...particularly Horses... and was ‘press ganged’ into the animal way of life by his family around about 1975.
Originally a newspaperman (of the old school), Keith has encountered life in the guise of a motor car and heavy commercial vehicle salesman, representative for the International Firestone Tyre and Rubber Company, transport manager and finally as a mobile crane driver before returning to newspapers as a photojournalist in the 1980’s.
More recently ( in 1988), he began the Northcote Heavy Horse Centre (a unique, enthralling and thrilling experience for all ages) in rural Lincolnshire...in partnership with his wife Ruth (a Lincolnshire lass).
Keith is a confirmed Christian and BBC Television ‘Songs of Praise’ visited the Horse Centre in 1995.
At the centre ‘today’ ( a sanctuary for horses needing care and now a registered charity) the animals are encouraged to develop their own characters. They continue to provide the entertainment for several thousand visitors every year.
Keith retired in 2008 after snapping an Achilles tendon and is continuing his lifetime as a ‘raconteur’ with a series of books and CD’s illustrating his unusual way of life.
Sammy the Shire Horse and his friends , story books for children, first went into print in 1993 together with a very much “ahead of its time” pair of audio books with identical words plus sound effects and music. These are all gradually being re released as e books and audio downloads.
Keith’s own “Diary Stories” were first published as a regular series in his local newspaper in the late 1990’s. Since then, Keith has continued to add to the huge number of intriguing and entertaining “daily happenings” until they now form the basis of the five “It’s a Rum Life” books he is beginning to publish as e books.
There are regular blogs and book excerpts to follow on these links: http://www.blogger.com/blogger.g?blogID=7227044119563421020#overview/src=dashboard

You have subscribed to alerts for Keith Sanders.

You have been added to Keith Sanders's favorite list.

You can also sign-up to receive email notifications whenever Keith Sanders releases a new book.