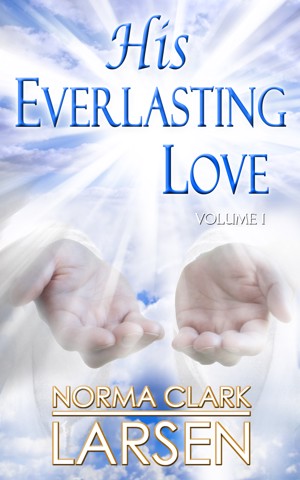 His Everlasting Love Volume I

Norma Clark Larsen was born in Brigham City, Utah. She was the tenth child of Jonah and Estella Frisbey Clark. After the death of her father when she was three, the family moved to Salt Lake City where she received her schooling. She married Rudy Larsen and they are the parents of nine children. She was widowed in 1964.
Sister Larsen attended the University of Utah, where she earned a degree in Sociology with minors in Speech and English. She has published poetry in the Children’s Friend and The Instructor.
She is best known in the West for her community service work and for her role as the 1980 Utah Mother of the Year. She served as chairman of cancer drives, polio clinics and as a member of the Community Services Council. She filled a two-year term as president of the Utah Mothers Association.
Her Church service includes extensive teaching activity, callings in ward Relief Society and Primary presidencies, participation as a stake, regional, and multi-regional chairman of the Special Interest group, and she served a mission for her church.
Her collecting of spiritual experiences has provided a valuable service, for the accounts serve as a renewed witness that there truly is a benevolent Father in Heaven that loves and protects His children who have come to experience the trial of mortality.
Sister Larsen passed away in 1999 and the reprint of His Everlasting Love volumes I and II, and the original printing of His Everlasting Love volume III is being done by her children because of her desire to open our eyes to the Father’s love and help; and to help us believe in miracles.

You have subscribed to alerts for Norma Clark Larsen.

You have been added to Norma Clark Larsen's favorite list.

You can also sign-up to receive email notifications whenever Norma Clark Larsen releases a new book.