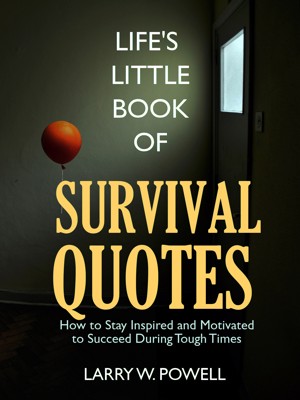 By Larry Powell
Rated 5.00/5 based on 2 reviews
Life’s Little Book of Survival Quotes was created for people who are going through struggles in their lives right now. It is a valuable guide and resource of inspiration to help you survive some of the tough times we all face in life. “Survival Quotes” are categorized by topic. Each includes an amazing array of quotes along with tips, stories and resources. More
Life’s Little Book of Survival Quotes by Larry Powell. Approx. 38,000 words. Language: English. Published on November 16, 2013. Category: Nonfiction.

Life’s Little Book of Survival Quotes was created for people like you who are going through struggles in their lives right now. Let it be the constant companion that you can turn to anytime day or night.

Do you feel like you just can’t go on?

Have you ever felt like hearing just the right words will get though the day?

The Little Book of Survival Quotes is the definitive collection of quotes, tips and inspirational stories you need.

Examples of Quotes You Will Find By Topic:

Adversity
“You can't be brave if you've only had wonderful things happen to you.”
~Mary Tyler Moore

Relationships
“What seems to us as bitter trials are often blessings in disguise.” ~Oscar Wilde

Insecurity/Fear
“Courage is resistance to fear, mastery of fear - not absence of fear.” ~Mark Twain

Failure/Misfortune
“Success is not final, failure is not fatal: it is the courage to continue that counts.” ~Winston Churchill

Examples of Tips You Will Find:

1. Trust Yourself. Believe that the power to do better is in you.
2. Work at it. Remind yourself that no matter how tough things are, they will get better if you work at making this happen.

Examples of Stories You Will Find:

J.K. Rowling: Her life story is the perfect example that success can eventually come to anyone. Before author of the Harry Potter book series became a success, she was a divorced mother, living on welfare, going to school and trying to write a novel in her spare time. In more successful times at a Harvard commencement speech she said, “Had I really succeeded at anything else, I might never have found the determination to succeed in the one area where I truly belonged.”

During times in your life when you are plagued by worry, fear, disagreement, or uncertainty, The Little Book of Survival tips is a powerful survival guide to help you reclaim your passion, possibilities and peace.

Larry Powell is currently a Dallas-based marketing and advertising professional. Although he has extensive experience in journalism as an academician and business entrepreneur, Life’s Little Book of Survival Quotes is his first foray into publishing his own works.

After the Twin Towers terrorist attacks on September 11, 2001, all but destroyed his means to earn a living (resulting in the loss of his business, his marriage and his home, colleagues, friends and family members), he fought his internal demons and realized there was no other choice but to pull up his boot straps and keep participating in his life.

As new doors started to open, his desire to bring uplifting, inspirational messages and tools to empower people to change their lives increased exponentially. He parlayed his experience in marketing and advertising into strategizing solution-based programs for profit and not-for-profit organizations. And established grassroots platforms to help individuals struggling to rebuild their lives and businesses during these very tough times hit by financial and natural disasters.

The entrepreneurial, philanthropic and humanitarian components of Larry’s nature are the basis for his need to nurture and support people to reach their fullest potential. He is a life coach, a mentor, philosopher, and an educator – all of which he learned through practical applications of the education he gained throughout his collegiate years.

Powell earned his Bachelor of Fine Arts in advertising from the University of Texas at Arlington.
But his professorships in communication and advertising at the P.I. Reed School of Journalism, University of Missouri School of Journalism, and Southwest Methodist University – and his business training of Chinese journalists in Beijing – were the real impetus behind teaching and inspiring people around the world how to live a more fulfilling, rewarding life.

Underpinning his drive to affect change are four key components: The human spirit, survival, diversity, and the “mojo” (the magic) in his passion for success -- all of which have been assimilated into his work with organizations such as the Boy Scouts of America, Habitat for Humanity, Texas Christian University, and hundreds of others across the United States.

His broad-based skills enabled him to create leadership modules used by staff at all levels, retail and promotional campaigns, city and state officials, and media clients. As well as business models for multicultural, spiritual, and educational programs, and the individuals running them. The coaching and mentoring programs Powell developed over the years are an amalgam of his career as a director of creative strategy; marketing/communications consultant; business director; founder and director of his own advertising agencies; and media mogul – all of which have been foundations for his exploration into journalism.

Before looking into the future as a writer, the positions in Powell’s arsenal of achievements speak to his humanitarian involvements, and as a formidable speaker and educator: Quest for Success Entrepreneur Award for Business Excellence; Dallas Society of Visual Communications (DSVC); Board of Directors for Boys & Girls Club of Greater Dallas; Board of Directors, Marcus Graham Project; Board of Advisors for ROXY (TCU Student Ad Agency); member of American Institute of Graphic Arts, Dallas Chamber of Commerce and the Black Chamber of Commerce; the D/FW Minority Business Development Council; and the National Association of Black Journalists.

Having crammed several lifetimes into one, he is a true visionary when it comes to the power of the written word. By establishing his Life’s Little Book 12-part series flagship, he is hopeful his words of encouragement can revitalize a disconnected, downtrodden mindset into one that can change any dream into a reality.

Life's Little Book of Survival Quotes
A valuable resource for inspiration and motivation to help you survive some of the tough times we all face in life.

"Life's Little Book of Survival Quotes" was recommended to me recently and at first I was hesitant about purchasing it, merely for the fact that I'd never really delved into the world of inspiring quotes in anything more than a passing thought. However, I was persuaded to give it a try and I am really glad I did. This was a beautifully uplifting collection of quotes that manages to make you think, make you fell, give you strength and inspire you in equal turns. Each of the quotes has a distinctive meaning and a personal touch that takes them out of the realm of obscurity and makes them deeply personal for the reader... no matter the troubles, tribulations or heartache/pain the reader might be feeling.

Larry Powell does a wonderful job of bringing these quotes to life and choosing survival quotes that speak to the spirit and uplift up while offering strength, support and guidance as well. When I finished "Life's Little Book of Survival Quotes" I felt like I'd just got a breath of fresh air and a boost to my spirit; the worries over money issues, career stresses and family squabbles melted away for a while and gave me a sense of purpose and determination to see things through. Overall, this collection of quotes really do bring out the survival instinct in you to persevere and to find meaning even in life's most trying times.

I was initially intrigued by Mr. Powell's personal story of triumph over adversity, and wondered how it would translate into a book utilizing quotes for supporting information. Once I got into his material I found a genuine desire to help people by sharing his personal experiences and thoughts on how to overcome struggles and difficulties that plague us during economical, political and emotionally difficult times. I have read and re-read his book several times, and each time I come away with a new point of view and feel very uplifted and renewed. I love how his organization of the chapters lead me from one thought to the next, which paints a beautiful connectivity of how our thoughts can sabotage our efforts and our relationships. We CAN be our own worst enemies, and his wonderful insights in how to climb over obstacles and challenges have been invaluable to me. I will treasure this wonderfulLife's Little Book of Survival Quotes, and will study the affirmations before I go to bed to make sure they're still with me when I get up the next morning. Thank you Mr. Powell for your beautiful efforts and sharing spirit, and I look forward to many more in your series!

You have subscribed to alerts for Larry Powell.

You have been added to Larry Powell's favorite list.

You can also sign-up to receive email notifications whenever Larry Powell releases a new book.