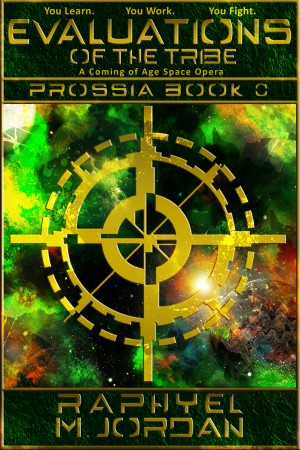 Evaluations of the Tribe - Prossia Book 0 : A Coming of Age Space Opera

By Raphyel M. Jordan
Rated 5.00/5 based on 1 reviews
When two alien friends desire nothing more than the respect from their peers, they will push themselves beyond the limit so they can be the last one standing in a dangerous local rite of passage that will test their courage, their will, and more importantly, their loyalty to one another. More
"You Learn. You Work. You Fight."

In spite her age, Aly should be the ideal Goolian combatant in her tribe. Her reaction time is faster than any adult. Her agility is off the charts, and she’s one of the top ranked sparring students in the entire village. If she could just fire a single beam of energy from her palms, like everyone else on her homeworld, she wouldn’t get pushed around, harassed in class, or long for acceptance. The Evaluations, however, can change that. If she can be the last one standing in a dangerous rite of passage that will put her years of training to the ultimate test, she’ll finally prove her worth to her people. Anything less, and she'll be the local outcast for the remainder of her life.

There’s another person in the tribe longing for the same prize due to a similar dilemma, and it will take all of Aly’s strength to defeat her. There’s only one small problem. That person happens to be her best friend.

Raphyel Montez Jordan, born February 10th, 1985, grew up in a Franklin, Tennessee household sensitive to the creative arts. As a child, his hobbies were drawing favorite cartoon and video game characters while making illustrated stories. This passion for art never left and followed him all the way up to his high school and college years. For example, while most of his friends were out at the movies or a football game, Jordan was stretched across his bedroom floor drawing and sometimes writing up till 3:00 in the morning.

It wasn't until college when he underwent a personal “renaissance” of sorts that Jordan took his interest in writing to another level. When he was 19, he started writing a novel for fun, taking inspiration from the constant exposure of different ideas and cultures that college showed him while staying true to the values he grew up to embrace. However, when the “signs of the times” influenced the story and the characters to spawn into universes of their own, he figured he might possibly be on to something.

As he studied graphic design at Armstrong Atlantic State University in Savannah, Georgia, Jordan also used his electives to study sciences like Astronomy, Psychology, and Biology in order enhance the reading experience in his story. He eventually made it a goal to have the story published after he graduated, and dubbed the goal “Operation Spanish Moss,” the very same project that would develop into his first published book, “Prossia.”

The rest, as they say, is history.

Evaluations of the Tribe Book Trailer
Two young alien friends must prepare for an unexpected and dangerous rite of passage that will not only test their worth to their people, but also the value of loyalty to one another.

Gripping and imaginative narrative with slick graphics - a force to be reckoned with.

You have subscribed to alerts for Raphyel M. Jordan.

You have been added to Raphyel M. Jordan's favorite list.

You can also sign-up to receive email notifications whenever Raphyel M. Jordan releases a new book.