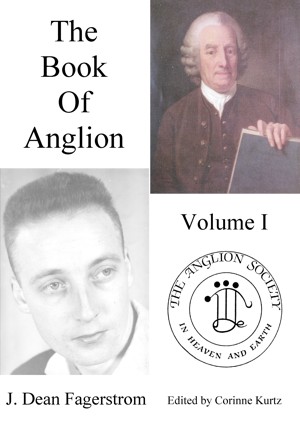 The Book of Anglion - Volume I

By J. Dean Fagerstrom
The Book of Anglion - Volume I is the first of 4 volumes that confirm, using basic mathematics and prime numbers, the revolutionary truths given to Emanuel Swedenborg by the Lord. This book will proclaim that death really means resurrection and that angels can now communicate more openly to those who are receptive to their suggestions. A spiritual awakening in Christianity is in the offing. More
This book is an aspect of the Lord’s Second Coming. Dean Fagerstrom, recently departed to the spiritual world (2/27/2014), was taught by angels in the writing of this book. His primary angel-guide is Maxine and her guidance is obvious in all 4 volumes of this book as well as in the 2 hour interview on the video “Learning About A World Beyond” (available at www.EmanuelSwedenborg.com) Her presence is memorable.
Dean received many spiritual gifts to support that he is an authentic messenger from heaven. They are described on the DVD. They include piano compositions he received from Franz Liszt and duly recorded and a gift for imagery apparent in much of his poetry. But the most important aspect of his ministry is his receiving the science of numerical correspondences originating in the Anglion and Aphax societies of heaven. The book is appropriately named The Book of Anglion aka the language of angels. Why you might ask does this book in 4 volumes have thousands of mathematical sequences confirmed by prime numbers? Our culture, our society is influenced far too much by some scholars and corporate, political and religious leaders, the latter aided by promoting false doctrines. I am referring to those leaders who are atheistic and agnostic in their thinking, openly or hidden if it serves their purpose. It will be hard for them to explain away the magnitude and consistency of these spiritual truths revealed by Dean fully supported by concluding prime numbers.
Dean recognized Emanuel Swedenborg’s fundamental purpose in describing how the Lord’s Second Coming is to occur. Swedenborg contends he was taught directly by the Lord as the spiritual sense of the Word aka the Bible was opened to him. This humble, brilliant scientist educated in Hebrew, Greek and Latin, while reading the original texts was taught by the Lord the spiritual meaning of the texts and the true doctrine that should be derived. Who better to do this, since many heresies permeated the message of Christianity over the centuries and had to be exposed. The Lord when called the Son of God reflects His Divine (or glorified) Human who longs for the salvation of the human race; angels work to this end also. That is why Matthew 24 describes the Lord’s coming as a thief in the night, when no one knows the day or the hour. His coming is not one big spectacular event when every eye shall see Him. To all whom Jesus appeared after His resurrection had their spiritual eyes opened to effect their mutual communication and visibility. And in our world many evildoers would not be granted this privilege; nor will the alleged believers be raptured out to safety while sheer horror descends on the rest of humanity. That is not the Lord’s style.
That is why the Lord is returning as the Word in clouds and with power and great glory (Matt. 24:29,30). The clouds, which are the letter of the Word, (Bible) tend to obscure and confuse the reader. But these clouds have been parted by Emanuel Swedenborg’s revelations which include more than 40 volumes. He is clearest in True Christian Religion Volume II 779-780, which follows. Robert Ripley wrote of Swedenborg’s accomplishments. Only Emanuel seemed to have the intellect (IQ over 200) and devotion to the Lord to accomplish this daunting a task. Swedenborg recognized that people of all faiths make up the church universal. It is that the teachings and doctrine he revealed will make it a clearer path, a hopeful journey, a joy and inspiration to turn over our wills to God, so that our wills become the Lord’s who can lead us by His Spirit within so much better than we can. This is what salvation is all about! We need our minds reformed- removing heresies and lies. We need our wills regenerated, so we can wisely surrender our willfulness and learn that more blessed fulfilling use the Lord can unfold in us as we respond to the Knock. Behold I stand at the door and knock, If any person hear my voice, I will come in to him/her and abide with them.

Justus Dean Fagerstrom was born the 7th day of February, 1932 in Pendelton, Oregon and was one of 7 children. His family traveled extensively, living in a number of southern states from when he was 5 until he entered high school. His mother was an aspiring Pentecostal minister and their circumstances were oftentimes poor. From the age of 11 Dean began to have out of body experiences and in his 20's visions both which accelerated after he left the US Army in 1967. He served 11 years, most of the time in intelligence. He married while serving in Germany and he and Helga have 3 children. His wife Helga passed over prematurely at age 45 but she has visited Dean 4 times as has his mentor, Emanuel Swedenborg. The spiritual truths he has learned at the hands of his guardian angel, Maxine and other departed persons are phenomenal and their primary focus is the science of numerical correspondences (see The Book of Anglion volume 1, and 3 other volumes to follow early in 2014). From early in the 1980's until 2002 when his health (a stroke) ended his spiritual journeys, they have become the source of many books (several yet to be published), sketches and even music. Dean survives in a nursing home at this time.

You have subscribed to alerts for J. Dean Fagerstrom.

You have been added to J. Dean Fagerstrom's favorite list.

You can also sign-up to receive email notifications whenever J. Dean Fagerstrom releases a new book.