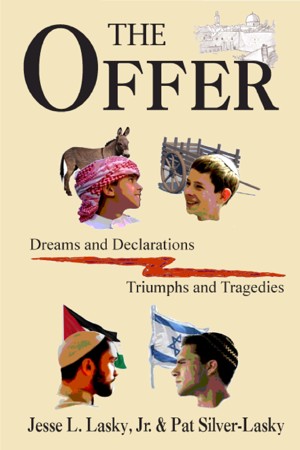 By Pat Silver-Lasky
This epic novel sweeps over generations of passion, hatred, friendship and fear––tracing the fortunes of two Palestine families. In 1843, an Arab boy and two Jewish brothers form a partnership that grows into an International banking empire - until the Zionist dream of Israel threatens their unshakeable friendship. The Offer explores both sides of a people caught up in the sweep of history. More
This epic, dynastic novel sweeps across more than half a century of passion, hatred, friendship and fear––tracing the entwined fortunes of two families in Palestine: one Arab, one Jewish. From the day in the late nineteenth century, when a young Hammadi boy and two Nouari brothers meet on the road to Jerusalem and form a partnership, there seems no limit to the growth of their banking empire. Together they conquer the international markets: London, Paris and New York, until a hidden crack threatens their apparently unshakeable friendship: The Zionist dream of Israel seeking reality.

The beauty of the novel is that it offers an objective view of the confrontation, showing both sides of the question without offending the sensibilities of either Jew or Arab. In fact, it provides a tantalizing view of what might happen in Palestine if the Arabs and Jews who had lived side-by-side for hundreds, even thousands of years, had been able to work out their problems without outside interference.

In addition to the accurate portrayal of a people caught up in the sweep of history, THE OFFER delivers a timeless message with a hope for peace, to a new generation. There are many weapons for peace. This book is one of them.

Pat Silver-Lasky wrote as a team with her late husband, Hollywood screen writer/author, Jesse L. Lasky, Jr. (son of the film pioneer whose company Jesse Lasky Feature Play Company produced the first full-length motion picture in Hollywood, 'The Squaw Man'. Jesse, Jr. wrote over 50 films, 8 for C.B. DeMille, including 'The Ten Commandments' and 'Samson and Delilah' - both, on the top 10 all-time box office hits.)
Pat wrote 8 films, nearly 100 TV scripts, (including award winning HBO series, 'Philip Marlowe' with Jesse. Born in Seattle, Washington, U.S.A., she attended the University of Washington, Stanford University and Reed College - where she produced and directed their first play. She also appeared in feature roles in films and played leading and co-starring roles on television, and directed for the theatre in Los Angeles and Palm Springs. Pat also wrote lyrics for two films at Columbia Studios, had 14 published songs, including "While You're Young" for Johnny Mathis's album, "Portrait of Johnny".
Pat moved to London in the 1960’s and has duel citizenship. In 1987 she and Jesse wrote the play, 'Vivien', based on their book, "Love Scene", the story of Laurence Olivier and Vivien Leigh. Pat directed its highly acclaimed first production at the Melrose Theatre, Los Angeles and the London Rehearsed Reading in 1992. Pat has contributed to various British antique journals, written short stories for international magazines including a 1999 series for A World of Romance. She was lecturer on screenwriting at the London Film School for 9 years. Her book, 'Screenwriting For The 21st Century' was published by BT Batsford Books in March, 2004. 'Ride The Tiger', OuroborusBooks.biz, 2012 is an erotic thriller about a Hollywood actress. 'Scams Schemes Scumbags' 2013, is a light-hearted look at comment through the ages, was written with Peter Betts.
With Jesse, Pat wrote the American Best Seller 'The Offer', first published by Doubleday in 1981. This exciting new Smashwords ebook edition (November 2013, 252,556 words) has been updated with an added timeline. The epic novel follows the lives of two families, one Arab and one Jewish. Historical figures mingle with vivid fictional characters in their entwined destinies.

You have subscribed to alerts for Pat Silver-Lasky.

You have been added to Pat Silver-Lasky's favorite list.

You can also sign-up to receive email notifications whenever Pat Silver-Lasky releases a new book.