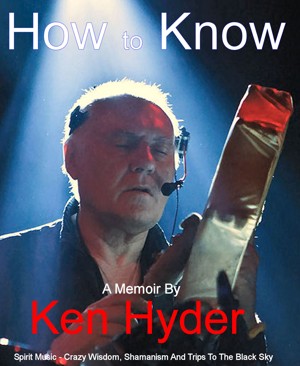 How to Know - Spirit Music - Crazy Wisdom, Shamanism And Trips to The Black Sky

By Ken Hyder
This is a memoir of a musician from Dundee, Scotland who began exploring spiritual energy before his teens when he embarked on a lifetime journey of connecting spirit through music. Ken Hyder’s musical explorations took him through over 30 albums of jazz and various ethnic musics. The spiritual path included encounters with Japanese and Tibetan Buddhist monks and finally, in Siberia with shamans. More
“The result is a seductively uncomplicated lattice of musical and spiritual cosmology from someone who has immersed himself in some of the most remote cultures on Earth.”

“Although not a long read, it is a very enjoyable one, frank and funny and often profoundly deep.”

Ken Hyder’s memoir is unusual. It is short, and tight. And it reflects the way he gained insights along his path…from Dundee, Scotland to the heart of Siberia and the shamans of Tuva, on the border with Mongolia.

He said: “Of course I read books. Lots of books. And I learned a lot from books. But what really struck me was that all along the way, everyone who gave me insights did it and a simple, brief way.

“They did not go on and on, deluging me with words, nor binding me with coils of instructions.

“So that is why the memoir is brief and to the point. It is more about showing how to find the knowledge rather than giving a booklist.”

He argues that most of what we need to know, we already know inside ourselves. But we are unaware of that fact. So we need to know how to find the knowledge which is often so simple, we just don’t see it.

Hyder examines how spirit manifests itself in different musics – including Gaelic psalm singing which was the fore-runner of American gospel - and how musicians working in spirit music put themselves in the right frame of mind to create that fusion of spirit and music.

He says: “There is no single right way, though there are plenty of wrong ways. Individuals need to find the right way for themselves.

“Some people may do better with peaceful meditation, while others will thrive better on active meditation.”

The insights of Siberian shamanic practice were gained just as shamans were coming out into the open after decades of oppression under the old Soviet regime.

Ken Hyder is a London-based freelance Home Affairs correspondent specialising in policing, drugs, and race for a range of national daily and Sunday newspapers.

He is also an cutting-edge musician who has made over 30 albums, starting with five albums fusing jazz with the music of his home country, Scotland, latterly collaborating with folk-based musicians from quite differing backgrounds - Tibetan and Japanese monks, Siberian shamans, South American and South African musicians.

In 1990 - with another player - he did the biggest tour of Russia by any British musician up till then. They played throughout the country from Leningrad to Vladivostok.

Later, Ken began studying shamanic music in Yakutia, Buryatia, the Altai and Tuva in Siberia. He performs and records with a shaman from Tuva, and that connection made it much easier for him to gain the confidence of local shamans who were very generous with the information they passed on. 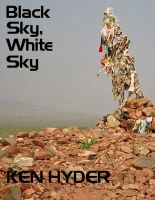 You have subscribed to alerts for Ken Hyder.

You have been added to Ken Hyder's favorite list.

You can also sign-up to receive email notifications whenever Ken Hyder releases a new book.