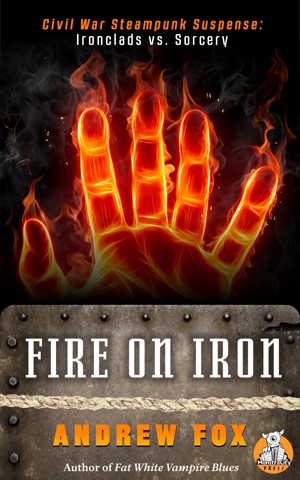 By Andrew Fox
Civil War steampunk supernatural suspense! USN Commander Micholson lost his ship but is given a chance to redeem himself: an undercover mission to destroy a hidden rebel boat yard. Encountering an arcane plot of African fire spirits to annihilate Federal armies, he is faced with a choice of risking the lives of all or merging with a demon… More
What price redemption? Is martial honor worth the cost of one’s soul?
Lieutenant Commander August Micholson lost his first ship, the wooden frigate USS Northport, in reckless battle against the ironclad ram CSS Virginia. However, Flag Officer Andrew Foote offers the disgraced young Micholson a chance to redeem himself: he can take the ironclad gunboat USS James B. Eads on an undercover mission to destroy a hidden rebel boat yard, where a fleet of powerful ironclads is being constructed which will allow the Confederate Navy to dominate the Mississippi.
But dangers far more sinister than rebel ironclads await Micholson and his crew. On the dark waters of the Yazoo River, deep within rebel territory, they become entangled in a plot devised by a slave and his master to summon African fire spirits to annihilate the Federal armies. Micholson must battle devils both internal and external to save the lives of his crew, sink the Confederate fleet, and foil the arcane conspiracy. Ultimately, Micholson is faced with a terrible choice — he can risk the lives of every inhabitant of America, both Union and Confederate, or destroy himself by merging with a demon and forever melding his own soul with that of his greatest enemy…
Book One of Midnight’s Inferno: the August Micholson Chronicles
Watch for Book Two, Hellfire and Damnation, available April, 2014!

Andrew Fox was born in Miami Beach in 1964. His first novel, Fat White Vampire Blues, published by Ballantine Books in 2003, was widely described as "Anne Rice meets A Confederacy of Dunces." It won the Ruthven Award for Best Vampire Fiction of 2003. Its sequel, Bride of the Fat White Vampire, was published in 2004. His third novel, The Good Humor Man, or, Calorie 3501, was published by Tachyon Publications in April, 2009. It was selected by Booklist as one of the Ten Best SF/Fantasy Novels of the Year and was first runner up for the Darrell Award, presented for best SF or fantasy novel written by a Mid-South author or set in the Mid-South. In 2006, he was one of the three winners of the Moment Magazine-Karma Foundation Short Fiction Award for his story, "Raoul Wallenberg in Space."

His newest book is Fire on Iron (Book One of Midnight's Inferno: the August Micholson Chronicles), a steampunk dark fantasy novel set aboard ironclad gunboats during the Civil War. It is published by MonstraCity Press.

Other recent projects (all soon to be available from MonstraCity Press) include: The Bad Luck Spirits' Social Aid and Pleasure Club, a fantasy novel which intertwines a supernatural secret history of New Orleans with the events of the Hurricane Katrina disaster and its aftermath; Ghostlands, an alternate history science-fantasy novel set in a world where the past refuses to remain buried; and The End of Daze, a theological/political fantasy-satire about the return of the Old Testament God to Earth.

Andrew's earliest exposure to the fantastic was watching the epic Japanese horror flick Destroy All Monsters at the age of three in the back of his parents' convertible at a drive-in. In 1994, he joined award-winning science fiction author George Alec Effinger's monthly writing workshop group in New Orleans. In 2003, Andrew married Dara Levinson; they now have three sons, Levi, Asher, and Judah. In 2009, he relocated his family to Northern Virginia so that he could take a job with the Department of Homeland Security, after having worked many years for the Louisiana Office of Public Health and the Federal Emergency Management Agency. He has also worked for Sagamore Children's Psychiatric Center in Long Island, taught musical theater and improv to children, overseen student programming at the New Orleans Hillel Foundation, and sold Saturn cars and trucks.

You have subscribed to alerts for Andrew Fox.