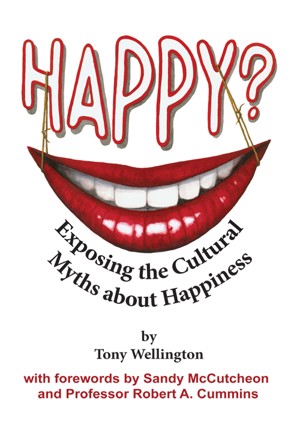 to find out wellington went in search of answers. he considered masses of empirical research from around the globe and interviewed a wide range of people, from celebrities to doctors. the result is “happy? – exposing the cultural myths about happiness”. it provides a fascinating insight into western society as well as the human condition.

curiously, although many of us know, deep down, what it is that really makes us content, we generally ignore our better judgement. We fall prey to the urgings of our culture. if we know that money doesn’t buy happiness, for example, why do so many of us expend more effort in the pursuit of wealth than any other activity? do romance or religion offer better paths perhaps? if positive thinking, raising self-esteem and goal-setting were effective processes, why hasn’t this knowledge led to there being lots of blissful people on the planet? why indeed do self-help books continue to outsell other genres?

this provocative book considers the phenomenon of happiness in its widest context. it offers what the author refers to as “an antidote to self-help books.”

there are introductions by author and broadcaster sandy mccutcheon, and also robert a. cummins, professor of psychology at deakin university, and editor-in-chief on the journal of happiness studies.

“tony wellington should be congratulated for having the courage to stand up to just about every dominant, mainstream and ultimately forceful ideology in Western society about what should be making us happy and why.”
- emma rodgers, the courier-mail

“happiness has become a western obsession and Wellington’s criticisms of the quick fixes pushed by the rapture pimps (fame, self-esteem, romance, religion and shopping) are timely.”
- emma tom, the australian literary review

“the book is interesting and enlightening, particularly in pointing out that what makes us deeply content is a sense of belonging – something that is sadly lacking in the rush-rush modern world.”
- jane fynes-clinton, salt

“tony wellington has made a valuable contribution to understanding not only happiness, but ourselves, and if at the end of the day you take nothing more away than an understanding of the direction in which contentment lies, he has done us all a service.”
- sandy mccutcheon

Tony Wellington is a curious kettle-of-fish. At various times he's been a film-maker, professional artist, freelance writer, photographer, lecturer, musician, social commentator and political activist. He holds a degree and university prize in media and communications, and has been a tertiary lecturer in media studies.

He is the co-author of a book about Australian film-making, Dont Shoot the Best Boy! He is also the author and photographer of Colours of Noosa and Colours of the Sunshine Coast.

Tony has contributed articles and illustrations to a wide range of books, newspapers and magazines.

Tony is also a husband, father, surfer, gardiner and cancer-survivor. On a number of occasions he has been told by oncologists that he should be dead, but he stubbornly refuses to take their advice.

You have subscribed to alerts for Tony Wellington.

You have been added to Tony Wellington's favorite list.

You can also sign-up to receive email notifications whenever Tony Wellington releases a new book.