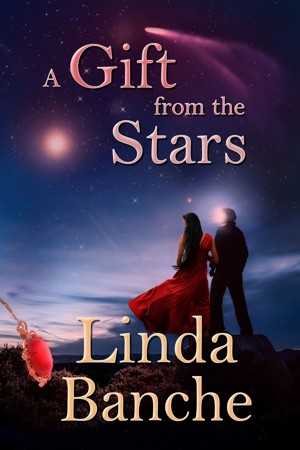 A Gift from the Stars

By Linda Banche
Rated 5.00/5 based on 1 review
One night, as Elizabeth observes the Great Comet of 1811, a sky craft lands and a man emerges from inside. When he leaves, he drops a small stone, which Elizabeth wears as a pendant. Her cold disappears and she feels good. So does everyone else who nears the stone, including the injured Jon. His recovery speeds up when he meets Elizabeth. Is the cause his attraction to her? Or something else? More
A gift from the stars can change your life.

Miss Elizabeth Ashby loves astronomy. She especially enjoys her once-in-a-lifetime chance to observe the Great Comet of 1811. However, her excitement vanishes the night an odd-looking meteor proves to be a sky craft which lands nearby. The man who emerges from the vehicle doesn’t see her, but as he reenters his craft to fly away, he drops a small red stone.

The stone from the stars glows and sends waves of warmth and something else through Elizabeth. Her incipient cold disappears, her illness-prone mother shakes off her maladies, and everyone else who comes near the stone, which Elizabeth wears as a pendant, feels in the pink of health.

Including Mr. Jonathan Markham, who also saw the strange meteor but was too far away to determine what the object was. Gored by a bull, Jon has been slow to mend until he meets the enchanting Elizabeth. Does his sudden speedy recovery emanate from his fascination with the desirable lady? Or something else?

Tired of the same old, same old? Then...

Welcome to My World of Historical Hilarity!

Quirky Regency drawing room, not bedroom, romantic comedies with nary a rake or royal in sight, sometimes spiced with paranormal, fantasy, mystery or science fiction.

But comedy is my love, and I've created my own wacky blend of humor and Regency with stories that can elicit reactions from a gentle smile to a belly laugh.

I'm a two-time EPICON finalist. I live in New England and I like ducks.

So, laugh along with me on a voyage back to the Regency era. Me and my ducks. Quack!

Visit me at my website http://www.lindabanche.com for more information.

Reviews of A Gift from the Stars by Linda Banche

A GIFT FROM THE STARS
Sweeping, Sparkling Romance - Would make a wonderful film!

Linda Banche writes superb Regencies, always original and deft and with added 'extras'. She has excelled herself with 'A Gift From The Stars,' a perfect marriage of the subject matter and her witty, appealing writing. There is real depth here and also sparkle, adventure, Christmas romance, space-ships, mysteries of over-worlds, prowling wolves, a healing crystal, gifts, love-choices and more. I devoured it and noted eagerly that the novel is the first of many.

The hero, scarred, wounded Jon, is a man everyone might wish for. Elizabeth is a lively, intelligent woman who stands up for what she believes in and for others - including Jon at a Christmas party when two Regency 'ladies' are less than kind because of his scarred, brooding appearance. Throughout the novel, Jon and Elizabeth join forces and defend each other against spiteful, narrow opinions and malicious, small-minded people, which is lovely. They are true partners and I was cheering them on.

Linda Banche also draws very appealing secondary characters. I hope Luc and Mr Armstrong (who for a time is a strong contender for Elizabeth's affections) both figure later in stories of their own. The rivalry in love between Jon and Mr Armstrong is engaging and realistic and Mr Armstrong is an interesting, honourable man. The scenes between him and Elizabeth are well drawn and at times most touching.

Stars are present throughout this story. Both Jon and Elizabeth are star-gazers and their interest in astronomy enhances the romance. (If you don't believe me, just read the deliciously sensual scenes where they are leaning close together, studying the two-tailed comet and the Gemini.) There are several mysteries connected with the stars, which gives the story a delightful other-worldly feel and ending, a perfect coda after a thrilling, dangerous climax.

'Should be made into a film' is a comment that is often made. In this case I think it is true. As a Christmas romance, as an adventure, as a compassionate and wry look at people, as a whirl of Regency manners, dances, feasts, gowns, artful conversation and growing love, 'A Gift From the Stars' makes a perfect read.

You have subscribed to alerts for Linda Banche.

You have been added to Linda Banche's favorite list.

You can also sign-up to receive email notifications whenever Linda Banche releases a new book.