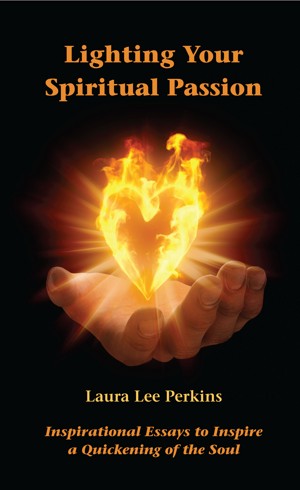 • Explores the mystery of life and the human desire to experience transcendence.
• Accepts spiritual guidance, flowing up and out of our deepest wells of intuition, as a fact.
• Demonstrates how guidance and support from the spiritual realm are the source of internal strength.
• Teaches us that when our personality and soul “marry”, our highest satisfaction comes from this union.
• Speaks to the flow, from the inside out, of a creative life animated by pure Spirit.
• Inspires a quickening of the soul, which yearns to meld with the personality, enabling us to fulfill our purpose here on earth.
• Feeds the soul with reverence and the mind with knowledge that enhances awe.
• Nudges the reader forward through sensitive and thoughtful dialogue into deeper levels of trust and knowing, resulting in a dynamic zest for life.

"Lighting Your Spiritual Passion" deepens readers’ spiritual connections through personal examples which illustrate spiritual connectivity in everything. The soul breathes and expands, propelled by the vibrations of Spirit, illuminating our earthly walk. Out of the darkness of uncertainty, we evolve into the light of knowing.

Laura Lee Perkins enthusiastic personality combines with a fluid writing style to create an inspirational leap forward for readers. Because the spiritual hunger for inspiration, knowledge and intuitive guidance is growing by leaps and bounds, "Lighting Your Spiritual Passion" will appeal to readers who are interested in spirituality, intuition, transformation, inspiration, and personal psychology: the mind-body-spirit connection. As a spiritual messenger who strives for clarity and wisdom, Perkins has been described as an engaging public speaker and a powerful writer who brings forth spiritual truths in refreshing and appealing ways.

Laura Lee Perkins is a spiritual writer, educator and professional flutist who exhibits a passion for life. Her career has included teaching at all educational levels, including Bowdoin, Bates, Prescott and Rio Salado Colleges. The author of seven books and 150+ published articles, she has been awarded Artist-in-Residencies at Acadia, Sleeping Bear Dunes, The Great North Cascades and Crater Lake U. S. National Parks and she was an American Musical Ambassadors staff member for several years throughout Europe and the British Isles. Laura Lee Perkins has produced five professional recordings and her flute playing is featured in three audio books: The Birchbark House, Paddle to the Sea and Bambi (Audio Bookshelf Productions) and in Vol. I/II - Paths of Grace CDs (Many Paths Institute). Her work has been supported by grants from The Maine Education Association (2x), The Puffin Foundation, A Coracle Foundation, Bank One of Arizona, Lyman Fund (2x) and the Tanous Foundation (2x). Laura Lee Perkins placed third in the 80th International Digest Awards - Inspirational Category 2011 Writing Contest.

You have subscribed to alerts for Laura Lee Perkins.

You have been added to Laura Lee Perkins's favorite list.

You can also sign-up to receive email notifications whenever Laura Lee Perkins releases a new book.