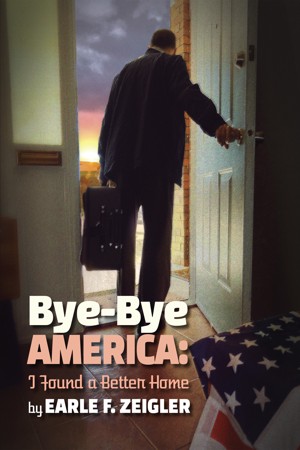 By Earle F. Zeigler
The title of this book means what it says — I say “goodbye” to living and working in America. I had indeed “found a better home” in a country (Canada!) where the academic position I aspired to at that time was available. Hence, what I have done by writing and publishing this book is to unofficially—but literally in many ways—publish my “goodbye” to the country of my birth.

A dual citizen of Canada and the United States, Dr. Zeigler has taught, coached, researched, and administered programs at four universities. (Western Ontario [twice]; Illinois, UIUC; Michigan, Ann Arbor; and Yale.) He has published 56 books and 451 articles. He has received the top six awards in his ﬁeld in North America. Zeigler has received three honorary doctorates and is listed in Who’s Who in Canada, Who’s Who in America, and Who’s Who in the World.

In this autobiography Dr. Zeigler tells his life story to the present. He describes the “ups” and “downs” of both his personal and professional experiences. Born at the end of World War I in New York City, Earle tells how his divorced mother, Margery, and his grandparents raised him. Then, when his mother remarried, they moved to Norwalk, CT where his stepfather (“Chaplain Jim”) was a pastor. Completing junior and senior high school, he went off to Bates College and a bit of graduate study in physical and health education at Columbia Teachers College. He also completed a master’s degree in German and a Ph.D. in Education at Yale University.

In his 70 years of experience with the field of sport and physical activity education (including athletics), he worked in the Bridgeport, CT YMCA briefly, and then went to teach, coach, and administer programs in sequence at Yale University, Western University in Canada, The University of Michigan, University of Illinois, and finally back again to Western University as dean of a new faculty where he remained until 1989. He had been active in semi-retirement to the present day. Starting in the new century, he has published 22 books and 21 articles to the present day.

Earle does his best to make this life story both interesting and humorous. Just as he was about to reach the pinnacle of his career, 3 staff members in his department at Illinois were involved in what became known as “The Illinois Slush-Fund Scandal”. Finally realizing that intercollegiate athletics in America was “hopeless”, and that a great deal about American values was beginning to “turn him off”, Zeigler became a Canadian citizen, also shortly after becoming dean of a new college in his field at Western University in Ontario. He is now “actively” semi-retired, still “writing away” in British Columbia at age 93.

You have subscribed to alerts for Earle F. Zeigler.

You have been added to Earle F. Zeigler's favorite list.

You can also sign-up to receive email notifications whenever Earle F. Zeigler releases a new book.