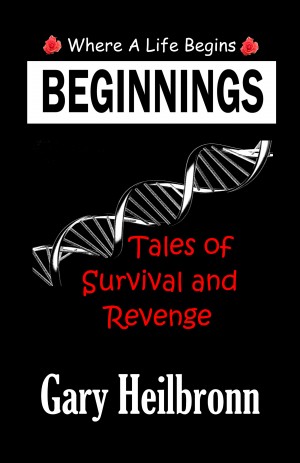 Beginnings : Where A Life Begins

By Gary Heilbronn
Rated 5.00/5 based on 1 review
It is early 1939 and the end of the Spanish Civil War as young Maria Abene, heavily pregnant and with a tiny son to care for, frantically flees Franco’s fascist forces across the border dividing the colorful Basque countries of Spain and France. Tragedy and an ancient cycle of murder and revenge stalk her every step. An epic historical tale of genetic memories and time-travel spanning millenia More
BEGINNINGS is a powerful drama played out over countless generations. A cycle of murder and revenge with its origins in the dim distant past returns to haunt a young woman in the mid-20th century as she seeks to escape war and violence and find a new life for herself and her daughter; only to realize there is no escaping the past.
The tale begins with Maria, a heavily pregnant young woman with a baby son in her arms is desperately fleeing persecution at the end of the Spanish Civil War. Attacked by border guards just metres from safety on her escape into France, she and her unborn daughter survive only with the help of an unknown assassin. The trauma sends the unborn baby’s mind deep into her genetic memories of a past where a terrible crime hints at the genesis of a violence that resurfaces time and again over the centuries.
As the young mother tries to rebuild a life for herself and her surviving child, another war, nazi occupation, collaboration and resistance followed by the injustices of liberation and divisive political forces in France and Spain cast a shadow over the decades that follow. These times see Anna, as a child, revisiting, or is it just imagining, dramatic events in the past when her ancestors faced ‘life and death’ choices. With these experiences she develops clearer insights into her true nature as she matures into a formidable young woman.
Meanwhile, Maria struggles with a world where the unfairness of evil’s triumph over good and the arbitrariness of life and death evoke only confusion, uncertainty and an almost loss of faith. "Her head told her that there was no justice but her heart was unconvinced."
Finally she begins to find some peace and the future looks bright for mother and daughter.
"She was relieved that her soul no longer weighed as heavily as it had before, or maybe she had learned how to bear its weight a little more skillfully."
But the scene is set for the coming of a terrible vengeance when ancient and more recent cycles of murder and revenge come full circle, leaving Maria just another victim, and Anna, like her ancestors before her, with little choice as to her life and her future.
Available ebook formats: epub mobi pdf lrf pdb txt html
First 5% Sample: mobi (Kindle) lrf pdb Online Reader
Price: $3.99 USD
Buy Add to Library Give as a Gift
How gifting works
Create Widget
Tags: genetic memory strong women spanish history basques postwar france murder and revenge travels through time escaping the past mediterranean history religion in history
About Gary Heilbronn

I have always been fascinated by the complexities of the human condition and my interests extend from criminology and politics, science and the occult to ancient and recent Mediterranean history as well as life in early Australia. I was born and grew up in Australia though I now live mostly in South-West France. Although my early studies were in literature and politics, I pursued a career as a lawyer and law professor in Australia, Switzerland and in Hong Kong, along the way, writing a couple of dozen law-related academic and educational books and dozens of academic articles.
Over the last couple of decades I changed my life focus to sailing the South China Sea, then raising horses in south-west France. Although I still does some academic writing and make contributions to journals, my first passion is literature. I have written some one-act plays but my first significant published novel is BEGINNINGS: Where A Life Begins, completed until 2013.
I am researching and writing the second novel in this two-part series as well as other fiction books, notably a memoir focusing on dogs and his early years growing up in Australia in the 1950s and early 1960s. I am married with grown-up children and grandchildren.

Reviews of Beginnings : Where A Life Begins by Gary Heilbronn

Beginnings: Where A Life Begins is an ambitious, multi-layered novel about the workings of genetic memory through many generations of women. The novel deserves a wide readership not only because of its original and audacious premise, but because each historical episode is vividly imagined, and the female characters, linked in ways they recognize but do not fully understand, are remarkable inventions in themselves.
The novel is predicated on the controversial idea that Mitochondrial DNA, transmitted from mothers to daughters, is understood, by certain outstanding women of their times, as an accumulated heritage. These women know the line they come from even if they cannot explain this knowledge; it gives them courage and it makes them proud.
Many of the women Heilbronn portrays as young, athletic warriors, but the main protagonist, Maria, a Basque refugee from Franco’s Spain, is of a different type. She suffers the tumultuous war years, having barely escaped across the border into France, and wishes only to remain unobtrusive and unnoticed by those who have the power to do her and her daughter, born shortly after her arrival, harm. The story moves in a wide arc, returning to Maria and Anna at various points. It is while Maria is giving birth to Anna – in a kind of trance – that the first return to deep genetic memory is accomplished, to the Cantabrian Mountains in about 10,000 BC. Other sections include ‘Coming of the Phoenicians’, Siege of Saguntum, (in the third century BC) and the Spanish Inquisition in the fifteenth century. Each is conveyed with an eye for detail, while the forward momentum of the story is maintained. Mt favourite section tells of the coming of the Phoenicians to the northern coast of Spain. The many differences between the indigenous people and the Phoenician traders, the troubles in which they find themselves, and in particular the character of Hannh, the young female warrior, made me want this section to continue.
At the end of the chapter describing Maria’s escape, readers are introduced to ‘an original, ornate dagger’ which, like the characters’ elusive yet crucial memories, has been handed on through thousands of years and will continue to play its own part in the story.
In an afterword, Heilbronn gives an account of the historical and scientific background to his novel, with particular reference to the meaning of genetic links in people like the Basques, ‘whose ethnic identity and genealogy have been insulated and isolated through millennia.’ Beginnings is complex and full of intriguing concepts and characters, yet at the same time emotionally vivid and fast-paced. Heilbronn has the ability to carry his readers along no matter if the scene is set in Palaeolithic times or the 1950s, with the rise of the Basque separatist movement. I highly recommend this book and look forward to its sequel.

You have subscribed to alerts for Gary Heilbronn.

You have been added to Gary Heilbronn's favorite list.

You can also sign-up to receive email notifications whenever Gary Heilbronn releases a new book.