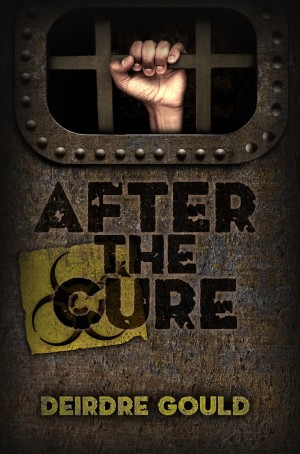 Six years ago, the tiny surviving community of Immune humans found a cure, and the Infected began to wake up and realize what they'd done. And what had been done to them.

Over time, society began to rebuild itself. Now it is ready to judge those responsible for the Plague. Nella Rider, the court psychiatrist and Frank Courtlen a defense attorney are trying to establish the truth. But more depends on it than they know. They race to find the answers they need before the fragile remains of humanity vanish for good.

A severe addiction to Post-apocalyptic literature combined with a lifetime of a very rural existence, first in central Maine and now in northern Idaho naturally led to both of Deirdre's novels: The Jade Seed and After the Cure.
Deirdre's education in anthropology and peace and conflict studies prompted the central idea for After the Cure: How do people live with each other after doing horrendous things to each other? How do societies put themselves together or continue to exist after terrible wars? What is day to day existence like when such violence exists within living memory? Though fiction can never come close to the reality of living with atrocity, it can help us ask important questions about our world and our treatment of each other.
Since living in the woods makes it all too easy to imagine being one of the last people left in the world, After the Cure is only the first novel of several that will take place in a post-apocalyptic, "post-zombie" world.

About the Series: After The Cure 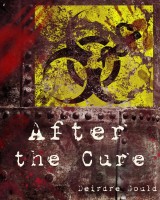 It's been eight years since the December Plague infected 99 percent of humanity. The Infected were driven to kill and compelled to consume other people. The Immune fought back until a cure was discovered and administered to surviving Infected. But the now cured Infected remember what they did during the Plague- and what was done to them. The remains of humanity struggle to pick up the pieces and put civilization back together.

Also in Series: After The Cure

Reviews of After the Cure by Deirdre Gould

There has been a terrible plague that turns people into cannibalistic zombies. This story is the adventures of a psychiatrist after the plague is cured and the survivors have to confront what they've done. It's a post apocalyptic world in which most people have died. We are never told where they are located, just 'The last surviving city'. It's probably in the United States but doesn't really have to be. In the story the plague was only eight years ago but things like roads and buildings have undergone more like a hundred years of decay.

The plot starts out as the trial of the guy who started the plague, which was caused by an engineered bacteria. In the process they find that there was an even deadlier one produced and there are still vials of that around. Most of the plot is a detective story of trying to find those vials and make sure they are destroyed. In the process they go out passed the wall and into areas where the people have not been cured. That section is like so many post apocalyptic stories, battles with zombies, scavenging deserted homes and offices, etc.

It is inevitable that anyone reading this today will compare it to covid even though it was published in 2013. There are a lot of similarities. 'The world quickly emptied of sanity' was a comment one character made. 'After the plague, the world is just too broken to put back the way it was,' is another. These comments may well be true today, but it is not covid that is the cause. The cannibal zombies in this story can be compared to those who refuse to wear a mask today, both the zombies and the mask-averse are deliberately killing people, the zombies didn't know it at the time because they were so insane from the virus. The mask-averse don't know it at the time because they have also been driven insane, but by the pace of social change and not by the virus. The author tries to make the point that human conflicts arise because of competition for resources or their allocation. That is the excuse that the powerful use, but without the presence of domineering men, scarce resources cause as much cooperation as conflict. Almost all human conflict arises from one person trying to dominate others and force the ones he has already dominated into going forth to dominate others. We were broken long before covid, see the 2016 election in the USA or the 2017 election in Brazil. The driving force is not disease but the enormous loss of status by males, white males in particular. Up until 1950 or so a female just about needed a male to survive, but in today's world the average female is better off without the average male

There are a lot of philosophical musing thruout the story, most of them having to do with guilt and redemption. There is actually very little about things like the cause of human conflict or how to restore civilization once it's been destroyed, or how to keep it from dying in the first place (prevent the amassing of wealth by the few).

There is a type of love affair in the story and there is some sex, though there is nothing explicit and you only once follow them to the bedroom when it is happening. There is more than enough violence, most of it against the zombies caused by the plague. The proofreading is not perfect but not bad enough to impair the reading, but there are a few places where there should have been a blank line and there isn't.

Finally, a post apocalyptic zombie thriller which examines both sides..Pre and post infection..Complete with backstory 'and' cliffhanger, all nicely sewn together.
This is an exceptional read. Well worth it !

I really enjoyed this book, this premise behind "The Cure" and the interaction between the characters was smooth and engaging. A good mix of post-apocalyptic and old fashion English crime novel.

You have subscribed to alerts for Deirdre Gould.

You have been added to Deirdre Gould's favorite list.

You can also sign-up to receive email notifications whenever Deirdre Gould releases a new book.