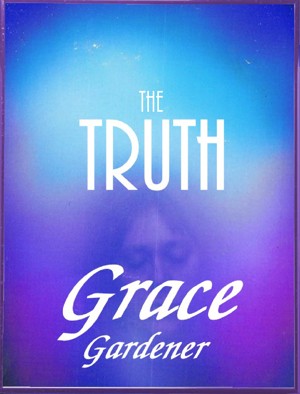 By Grace Gardener
The Truth, Part 1 - Lynn Mickelsen. The cover is a picture of Lynn's aura, the white above her head is God, and the oblong, white specks are angels. 'The Truth' contains some cult legends about Lynn. This is a companion book to 'The Conversation.' Many, many people in the Science, Music, Computer and Entertainment Worlds will come forward to validate her story. More
In 2007 God named me Grace.
The Truth is a short book, only 31,000 words, it details four events that people have called miracles, and only two of the dozens of murder attempts. It contains some of the same information contained in ‘the Conversation,’ so it’s a quick read.
If what Rita says is true, and I’ve been ritualistically sacrificed more than once; it must also be true that God has kept me alive to tell this story.
According to Rita I’m still considered an enemy of the Satanic Churches. It had been determined, nearly sixty years ago, that I was the one in their legends who would change the outcome of Armageddon: so I had to be destroyed, because I would change the Satanic Churches’ way of life. For that reason, Rita set on a campaign to discredit me. She, and her church, abducted and killed or brainwashed everyone in my family, and everyone I know and love, to believe I’m someone I’m not.
I’ve been to Heaven where I met Christ. I talk to God, Jesus Christ and the Holy Spirit (the Lady) regularly. I always feel the strong presence of the army of Angels that surround me. Throughout this book I refer to them as “my peops,” (pronounced peeps) meaning, my people. They guide and protect me. I’ll be happy to get back home to Heaven.
'The Truth' about Lynn's life as a slave and prisoner of a satanic cult in north west NJ, is a companion book to 'The Conversation.' Other books by Grace C. Gardener are - Garden of the Light - and - Confusion turned to Chaos ()
A blueprint for destroying the world is contained in the Satanic Book of Revelation. A blueprint for the 9-11 attacks was given to directly to George W. Bush a few months prior to the attacks. Satan worshippers have stockpiled the unfound Weapons of Mass Destruction, for their own personal use. Our Armed forces were sent to find the WMDs, in the Middle East, but they had been moved to the tiny African Nation of Djibouti. Some are possibly in Syria, Palestine, the Mediterranean Sea and Somalia.
Download: epub mobi (Kindle) pdf more Online Reader
rtf lrf pdb txt
Price: Free! USD
Add to Library
Create Widget
Tags: death experience angel and demon lynn mickelsen angel demon devil hell heaven prisoner memoir lynn pezzutti mickelsen
About Grace Gardener

Grace wants World Peace. There are many people working against Grace. There are about 1 or 2% of the country who want World War Three. Those 1% are in high-ranking politics.

Here’s my dilemma. I’m being abused by the NSA. My rights as a US citizen are nonexistent. My right to privacy is long gone. They have put a homing device and a microphone in my stomach, supposedly attached to my spine so there will be bone conduction. I have an X-ray picture of it. I was told if I take it out I will be killed. I doubt it, but still, it’s not a good feeling. If I go to the ACLU to complain, my phone call will be intercepted and my meeting will be recorded. If I confide in a friend about what’s happening to me, she’ll be killed.
The NSA has brainwashed my daughters into not trusting me. They’ve been working on torturing them every week for the past 15 years. When I left in my RV they loved and trusted me, but now that I haven’t seen them in so long that now they’re afraid of me. When I was there, living with or near them, even though they were being tortured to hate me (that’s true), once they saw me again they were fine. But I can’t even call them. I know most of my calls are diverted, and I know when they try to answer, that’s diverted, too. But I don’t try hard and I can’t talk to them about anything meaningful because I know they’ll be tortured for many hours. And then they’ll be tortured, drugged and electrocuted to forget and when I talk to them again they’ll say, “It never happened.”
NSA Agents are doing the same thing to George Lucas. I was told no one really wants to hurt George, but they “have to.” But they think he’s a nice guy so they feel badly about it. Well that’s something, I guess. But the Government and other cults should not have round-the-clock accessibility to agents who are trained killers and have had their free will taken away through torture and electroshock. The best agents have had their personality split, so one personality takes over to carry out “orders” while the original personality watches helplessly. There’s a better way to run the military, and I was about to get through to put forth my ideas when the order came through to kill the three Generals who wanted to listen to me: and to kill six special agents who had been listening to me.
I listen to these guys and I wonder if they have any feelings at all? I know they do even though they’re not “allowed to.” They’re not “allowed to” complain, either, under fear of death. If they try to retire, they’re not de-programmed, they are killed!
I watched the Clint Eastwood movie American Sniper about Chris Kyle and I’m sure I commented on it a lot, but my readership has grown significantly and I know I’m monitored and it’s the guys doing the monitoring, who I’m trying to help. Even tough guys need a little help sometimes.
I wonder if the death of Cris Kyle, played by Bradley Cooper, was planned the way it was to get me to say something about it. Everyone in the NSA knows what happened. Chris was killed because he got out. Tragically, Chris seemed to be capable of healing himself with the help of his family and still he was murdered. The man who murdered him was under orders. True! I have many, many confirmations on that statement.
The judge sentenced Eddie Ray Routh, Chris’s murderer, to life in prison without parole.
The movie writeup says - “U.S. Navy SEAL Chris Kyle (Bradley Cooper) takes his sole mission -- protect his comrades -- to heart and becomes one of the most lethal snipers in American history. His pinpoint accuracy not only saves countless lives.”
Back to my dilemma, I can’t get in touch with anyone for fear they will be tortured or killed.
You think, “I thought the US didn’t torture?” Well we do. My daughters and I are born and raised here. We are good people, we’re exceptionally good people and the NSA has a HUGE problem with that. The people who give the orders want war and we want peace, and they’re making us the bad guys?
The only emails that get through to me are business and junk. Supposedly I get comments on my website that don’t come through, and I have to wonder if our military goes around killing anyone who tries to contact me?
My phone rings all the time but not here. This was true when I was in NJ, too. Nobody got through to me. The call is sent elsewhere and other people pick it up pretending to be me and the women pretending to be me are nasty bitches. If I call someone and straighten something out, I find out later that the conversation never happened, I was really talking to someone in the NSA, and I have to get back to square one. Most times things are so impossible, I give up.
I escaped my ex-husbands satanic cult only to find myself embroiled in the government’s cult. A much thicker, stickier web. They have kept my money from me so I can’t even get an apartment. That’s stealing, but they’re the military so nothing is illegal, not murder or theft.
I feel if I call someone for help he or she will be killed or badly hurt. Just being my friend or talking to me can get you sick with cancer or dead.

I think people who I have helped, or who have asked to help me, need to go to the press to tell them what a pickle I’m in . There are many people who have offered to help me over the years. Many have been killed. I don’t understand how a kid in a uniform can break into Steve Jobs’ house and inject his brain with liquid smoke, or some other carcinogen: and if he questions those orders his buddy will be told to kill him. They have to kill each other all the time. It’s so f_ked up I can’t stand it. Neither can the Agents.
They don’t realize that “under orders” is meaningless. If they’re caught they’ll be tried for murder.
Steve Jobs was a great man. No one, no politician, and no officer, has the right to murder any citizen, especially one who makes this country proud. 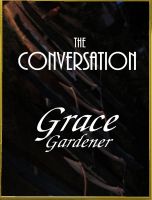 Reviews of The Truth by Grace Gardener

You have subscribed to alerts for Grace Gardener.

You have been added to Grace Gardener's favorite list.

You can also sign-up to receive email notifications whenever Grace Gardener releases a new book.