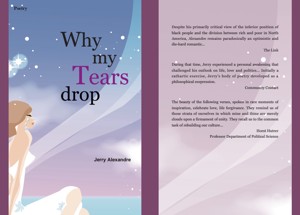 Why My Tears Drop

By Jerry Alexandre
Why My Tears Drop, this enticing collection of poetry, is a fascinating book that addresses the critic and the need to reflect the opinion of a public that misconstrued the attitude and social position of the poet. Poetically, the book was written to engage the audience in a more precise and constructive manner. Despite that fact, the poet remains highly romantic and critical of the class issue. More
Not to abandon his social position and critical view of society, the poet endeavored to make his view clear to the public. The pieces are written as responses to what he perceived as erroneous policies that could have devastating effects on the population. Why My Tears Drop is like a dialogue between the audience, head of state, and a society which needs to properly considers its future and where those who are concerned about the well-being of all wish to see the next generation. At the same time, in the first, the poet still shared his love letters and heart with the world. He addresses love as that euphoric feeling that we mostly desire to be showered in when we wake up in the morning. The purity of love is undeniable, and he strived to capture that sentiment from its essence. The collection speaks for itself, and this explains why the book was well received when it was first published a few years ago.

Jerry Alexandre was born on January 13, 1972 in Port-Au-Prince, Haiti. At 15 years old, he departed to Canada. Almost two years later, he moved to the United States where he lived for almost a decade. At 22 years of age, he began to write poetry. In 1997, he returned to Montreal where he attended Dawson College as a Social Science student.

In fact, throughout the years Jerry spent in Montreal, bitterness helped him to discover the unrealistic side of a bourgeois society. He came to realize misery was everywhere. Afterward, he went to New York City where his whole existence and body seemed to shatter into lost pieces. While on a journey into the wrong side of the world, he perceived education was and still is the key that opens steel doors poverty sealed tightly. Since he was expelled from the educational system at 16 years of age, Alexandre adopted the street life as any abandoned child would in this cold and heartless dungeon. During his short and woeful excursion, he resigned to complete his education where he was chained in a lonely cage. When Jerry returned from the States on May 15, 1997, he applied for College. Unfortunately, he was refused because the administrative board thought he was unprepared. He worked night shifts baking donuts to obtain the excessive amount of money that the poor do not have to buy the hours to complete the requirements for the diploma. Overcoming this heart wrenching social obstacle, he went to school despite the continual rejections. Jerry attended classes anyway, where he has been successful ever since. Education is a vital tool, but self-education is a mysterious phenomenon.

You have subscribed to alerts for Jerry Alexandre.

You have been added to Jerry Alexandre's favorite list.

You can also sign-up to receive email notifications whenever Jerry Alexandre releases a new book.