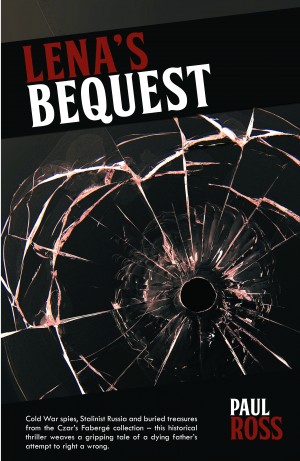 By Paul Ross
Rated 4.00/5 based on 1 reviews
Bequeathed a hidden fortune by the father she never knew, Lena’s search becomes complicated by inner turmoil over the man who abandoned her and his ruthless enemies, also searching for the Czar’s treasure. Months away from starting law school, when a stranger enters her life, Lena accepts the challenge and discovers her parents’ hidden past and dark history. More
Disclaimer: The material in this book contains scenes, language and/or thematic content that some readers may find disturbing. Reader discretion is advised.

Gardening was all that Lena had in mind when she rented an isolated house in the empty flatland of Northwestern Ohio. That changed abruptly the day an elderly stranger with an eastern European accent startled her while she was tilling the soil. That unnerving event set in motion a deadly treasure hunt populated hick sheriffs, a Russian mobster and his rapine grandsons, spies, refugees and the specter of her absent father. Karl, the mysterious stranger, fed Lena, in tidbits, a story of her late father’s astounding life and unlikely bequest. Lena is a very capable young woman with street smarts who never really trusts Karl, as well she shouldn’t, but the lure of a treasure hunt and the credibility lent to it by the attention of mobsters tempts her to go along. Karl insists that the search must begin in New York City where Lena is stunned to learn that she owns healthy bank accounts and a midtown apartment. Then the trail gets hot.

Lena’s Bequest is told in flashbacks to Stalin’s purges in the Ukraine. The story of her father’s escape from murder, starvation, deportation and his eventual flight to the west is a disturbingly truthful look at the conditions in, and as a result of, the Gulag. How the atrocities of those decades of institutionalized starvation, slavery, torture and murder might impact a modern woman grappling with life in twenty-first century America is a highly plausible and fascinating tale. Paul Ross has an extremely well written and researched book that will appeal to history lovers, fans of action and suspense as well as readers who like a strong female lead character.

You have subscribed to alerts for Paul Ross.

You have been added to Paul Ross's favorite list.

You can also sign-up to receive email notifications whenever Paul Ross releases a new book.