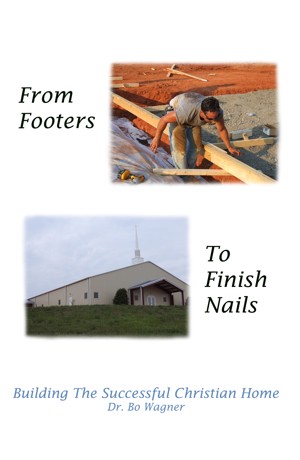 From Footers to Finish Nails

By Bo Wagner
This is a book about the Christian Home. It uses the building of our church building to describe how a home should be built on Christ.

Dr. Wagner is the founder and pastor of Cornerstone Baptist Church of Mooresboro, North Carolina. He was saved in 1979 and began preaching regularly as a twelve year old boy in 1982.
He earned an Associate’s Degree in Communications Technology from Cleveland Community College in 1989. He earned his Bachelor’s Degree in Pastoral Studies with highest honors in 1997 and then his Master’s and Doctorate with highest honors from Carolina Bible College in 2001 and 2003. He founded Cornerstone Baptist Church in 1997. He has been teaching at the Carolina Bible College since 2000 and has been a professor since 2003.
He has been writing books since 2009, and currently is a columnist in nine newspapers.
Along with pastoring, Dr. Wagner preaches in many revivals, camp meetings, and family conferences each year.
He married Dana in 1994. They have three Children: Caleb, Karis, and Aléthia.

You have subscribed to alerts for Bo Wagner.

You have been added to Bo Wagner's favorite list.

You can also sign-up to receive email notifications whenever Bo Wagner releases a new book.