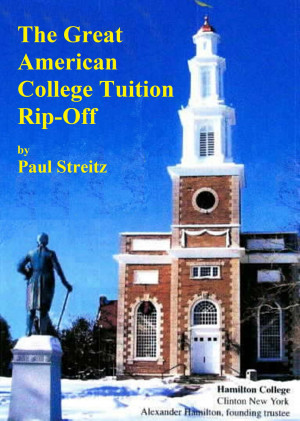 Increased money available for college through loans, scholarships and government grants has not made college tuition more affordable. Colleges and universities quickly up their expenditures to meet the revenue available and then cry poverty to their alumni.

It examines Hamilton College showing trends in tuition, number of faculty, comparison to non-elite colleges and other information. It examines the role that U.S. News and World Reports plays in increasing college tuition. It determines that college tuitions are not set by the actual costs of running a college; rather, tuitions are set by how much money an institution can charge parents and students. It shows the dramatic increases in the number of faculty, administrators and staff. It shows the proliferation of courses and extra-curricular programs unnecessary for an education.

The book determines that the financial objective of colleges and universities is to spend as much money as possible, with no sense of cost consciousness or the impact of higher tuitions on students. The institutions then raise tuition and ask for more money from the alumni. Tuitions are not set by costs, but by demand.

It concludes that parents and students must organize into Parent-Student Associations and make tuition a matter of collective bargaining.

Paul Streitz is a graduate of Hamilton College and has an MBA from the University of Chicago.

He is the co-author of two musicals, OH, JOHNNY and Madison Avenue, the subliminal musical.

He is author of Oxford: Son of Queen Elizabeth I, The Great American College Tuition Rip-off and America First: Why Americans Must End Free Trade, Stop Outsourcing and Close Out Open Borders.

You have subscribed to alerts for Paul Streitz.

You have been added to Paul Streitz's favorite list.

You can also sign-up to receive email notifications whenever Paul Streitz releases a new book.