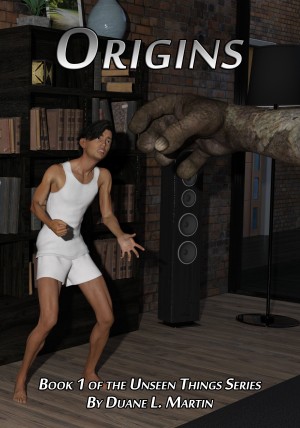 His story hit the local news, and he was thrown into a social system that only seemed to exist to make him feel like he was crazy. Ultimately he was placed with a wonderful set of foster parents, but school was a different matter entirely. He was treated like a freak, and turned into an outcast whose only comfort was a notebook, in which he obsessively drew page after page of what happened on that fateful night.

When he started his senior year of high school four years later, he expected it to just be more of the same. He never dreamed that he'd meet two amazing girls named Tina and Sarah who actually wanted to hear his story. Not only did they believe him, but they made it their mission to try to find him some answers.

Their search eventually leads them to a woman named Patricia Samuels, the caretaker and record keeper of a library full of lost information. Her books, some dating back centuries, contain some of the answers they're looking for. To get the rest of the story however, she'll have to fly out to Ohio to visit an old man who could hold the key to everything they've been looking for.
Available ebook formats: epub
Price: $3.99 USD
Buy Add to Library Give as a Gift
How gifting works
Create Widget
Tags: fantasy contemporary trolls origins unseen things duane l martin
About Duane L. Martin

Duane L. Martin began his writing career when he started a classic film review website back in 2002 called B-Movie Central. Two years later, he would go on to create another website called Rogue Cinema, which is a monthly online magazine staffed by a wonderful team of volunteer writers that's devoted to film reviews, articles and interviews with film makers and other industry professionals.

His aunt, a published author as well, once gave him a book on creative writing that changed his life forever. It was a collection of pieces by various authors, but one piece in particular has always stuck with him. It talked about how to create characters that feel like real people by giving them real backgrounds, likes, dislikes and personalities. It inspired him to create characters that feel genuine and real, like people you may know, or people you'd like to know, and helped him take his writing to the next level.

Aside from his writing, Duane is also a musician. He took his first bass guitar lesson in 1987 and has been playing bass ever since. He also plays some guitar and a little keyboard. As he's always been a great lover of music, he often has it playing quietly in the background while he writes.

Born and raised in Northern California, he would later move to Idaho, where he currently lives with his wife Sharon and their dog Buddy.

You have subscribed to alerts for Duane L. Martin.

You have been added to Duane L. Martin's favorite list.

You can also sign-up to receive email notifications whenever Duane L. Martin releases a new book.