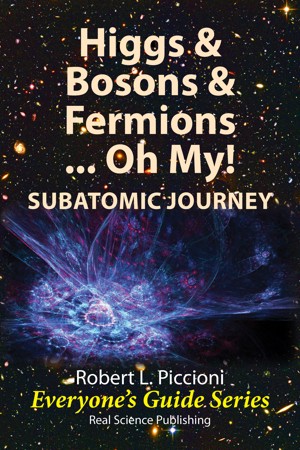 The pursuit of nature’s smallest parts is one of mankind’s oldest quests, beginning at least 26 centuries ago. But, just in our lifetimes it seems we’ve finally “hit bottom.” Each step deeper into the Micro-World has revealed surprises, and expanded our understanding of nature on all size scales. At the bottom, we see a remarkable unity — nature is the same everywhere. Each galaxy could have been made of different types of matter, just as Earth’s continents have different flora and fauna. Instead, everything everywhere in the universe is made of just the same few elementary parts.

Einstein said: “The most incomprehensible thing about the universe is that it is comprehensible.” Now we know why. It is the simplicity of its smallest parts that allows us to comprehend the bewildering diversity and scope of our universe.
Available ebook formats: epub
Price: $2.99 USD
Buy Add to Library Give as a Gift
How gifting works
Create Widget
Tags: science higgs boson antimatter particle physics microworld
About Robert Piccioni

Dr Robert Piccioni is a physicist, public speaker, educator and expert on cosmology and Einstein's theories.

His "Everyone's Guide Series" e-books makes the frontiers of science accessible to all. With short books focused on specific topics, readers can easily mix and match, satisfying their individual interests. Each self-contained book tells its own story. The Series may be read in any order or combination.

Robert has a B.S. in Physics from Caltech, a Ph.D. in High Energy Physics from Stanford University, was a faculty member at Harvard University and did research at the Stanford Linear Accelerator in Palo Alto, Calif.

He has studied with and done research with numerous Nobel Laureates. At Caltech, one of his professors was Richard Feynman, one of the most famous physicists of the 20th century, and a good family friend.

Dr. Piccioni has introduced cutting-edge science to numerous non-scientific audiences, including school children and civic groups. He was guest lecturer on a National Geographic/Lindblad cruise, and has given invited talks at Harvard, Caltech, UCLA, and Stanford University.

You have subscribed to alerts for Robert Piccioni.

You have been added to Robert Piccioni's favorite list.

You can also sign-up to receive email notifications whenever Robert Piccioni releases a new book.