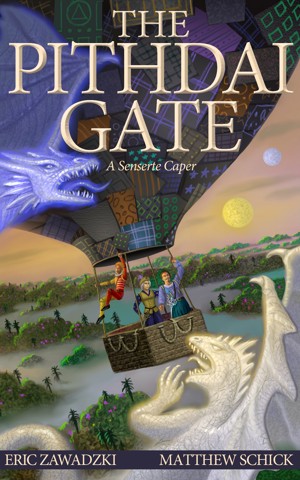 The crown prince of Pithdai has been kidnapped, and the ransom is a trove of magical paintings.The Senserte must orchestrate a plan to make the dangerous exchange to save the prince and bring the kidnappers to justice, but this caper has a catch: the prince might not want to be rescued. More
Swashbuckling! Museum heists! Hot air balloons! Lake monsters!

The crown prince of Pithdai has been kidnapped, and the ransom is a trove of magical paintings — any one of which could destroy the fragile political and cultural balance of the nascent Flecterran Union.

Luckily, the king’s daughter, Arrina, leads the indefatigable Senserte — the Eyes of Justice, who are traveling players by day and ruthless crime-fighters by night.

The Senserte must orchestrate a plan to make the dangerous exchange to save the prince and bring the kidnappers to justice. But it’s hard to plan for everything. Territorial air elementals, voracious lake monsters, and a rainforest of living nightmares are all in a day’s work, but this caper has a catch: Arrina's brother might not want to be rescued.
Available ebook formats: epub mobi pdf rtf lrf pdb txt html
First 20% Sample: mobi (Kindle) lrf pdb Online Reader
Price: $2.99 USD
Buy Add to Library Give as a Gift
How gifting works
Create Widget
Tags: adventure fantasy magic caper heist high fantasy rainforest
About Eric Zawadzki

Four Moons Press is the label Eric and Matt use to describe the books they write together about their fantasy world. The setting, characters, and even the period in history may be completely different from one book to another, so naming the whole series after one country or major character doesn’t really work. No matter the story, though, the planet it takes place on has four small moons set in improbable orbits. Four Moons Press publishes the stories of that world.

Besides, Zawadzki and Schick are much harder to spell.

Eric spent his Midwestern childhood reading fantasy, so it probably isn’t surprising that he came to idealize stories of going to a far-off land. When no wizard showed up to tell him he was the heir to some otherworldly throne or the only one who could defeat the nefarious designs of a dark god, Eric took this whole questing hero thing into his own hands.

While backpacking alone in Poland without so much as a phrasebook, he met many strangers who gave him advice and directions. One family even took him in for the night, feeding him and asking him about his travels. No bandits or wolves, but that’s probably for the best. He still has nightmares about that wolfman from The Neverending Story.

He lived for a time among the majestic mountains of Colorado before seeking his one true love, Beth, on the frozen wastelands of Minnesota. They married on a beautiful spring day and are in the process of living happily ever after.

Indiana had a slogan in Matt's childhood: “There’s more than corn in Indiana.” Driving around the state, he agreed — there were also soybeans and vast, flat skies. He found inspiration because there was so much room for it, inspiration to explore, to fill himself with variety, and to write with them in mind.

He now lives in Charlottesville, Va., with his lady, whom he met while working as a journalist in Hawaii. He ended up in Hawaii after doing similar work in Colorado and Virginia, and going to college in Wisconsin. In his explorations, he has found people, food and experiences that made each place an inspiration for the worlds in which he writes. 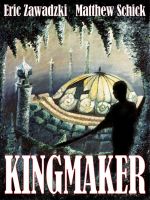 Reviews of The Pithdai Gate by Eric Zawadzki

You have subscribed to alerts for Eric Zawadzki.

You have been added to Eric Zawadzki's favorite list.

You can also sign-up to receive email notifications whenever Eric Zawadzki releases a new book.