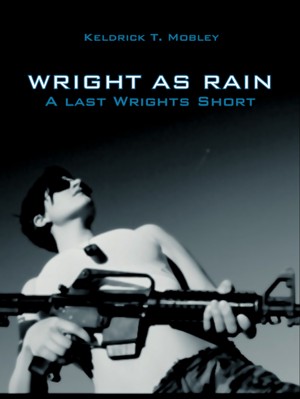 By Keldrick T. Mobley
The worlds sexiest assassin needs to send a message wrapped in a bullet and will get it there no matter if its rain, hail, snow or sleet... More
Kionda "King" Ingrid is the best in the business and her services don't come cheap. When a desperate man dumps his life saving out of a paper bag to hire her, she soon finds herself going to any means to get to the bottom of things, even if that means going all the way to the top.
Download: epub mobi (Kindle) pdf more Online Reader
rtf lrf pdb txt
Price: Free! USD
Add to Library
Create Widget
Tags: thriller action guns revenge assasin sniper machine guns
About Keldrick T. Mobley

Keldrick T. Mobley was born in Miami Florida, January 19, 1979 and has lived in South Florida his entire life. During his second grade school year his teacher Miss Rhodes noticed that he had trouble staying focused in class. He was given an IQ test and his score reflected a higher capacity for learning than most children in his grade level. Keldrick was quickly recommended for the Dade County Gifted program that found that his hyperactivity was due to under stimulation in the classroom. Keldrick remained in the program until middle school when the program was phased out and then placed into honors classes.
In high school Keldrick displayed an interest in Journalism and Drama, choosing to focus on drama as at that time it challenged him more creatively. His senior year, Keldrick won the award for ‘Best in State’ for a solo performance. After graduating high school he and his mother had an argument that saw Keldrick leave home and move to Mississippi for a short period. On his own for the first time, Keldrick began to wonder about his future and question his rash decision to move so far away from home.
Keldrick returned back to Miami and began to attend Miami Dade Community College. It was here that Keldrick tried his hand at Drama and Journalism again but found that this time it was Journalism that held his attention. He began as a reporter for the college paper The Falcon Times but found reporting facts to be creatively stifling for him. It wasn’t until he was offered his own column did he see his writing career take off. Off the strength of Keldrick’s humor column, readership of the school paper increased by almost thirty percent. Some English professors went so far as to make his column required reading for extra credit and there were numerous campus debates that were not only sparked but also fueled by Keldrick’s opinions. Keldrick went on to win the Florida Community College Activities Association State Publications Newspaper Best humor in 2001.
In 2004 the recognition of this title helped when Keldrick was approached by his former professor Dr. David Demko to help him with a piece that Blender magazine had requested. Dr. Demko (creator of the Death Calculator) studies Gerontology, the science of aging, and needed Keldrick to help him with the magazines young audience. The result was a monthly feature that continues to run to this very day.
Twenty years after realizing writing was his passion, Keldrick decided it was time that he focused on honing his talent for writing and began his first novel Lions For A Day. Lions For A Day has quickly become one of the fastest selling book on the internet and has two sequels already planned out. Keldrick still loves the stage and occasionally can be found in Miami Lakes performing improve comedy with a sketch group Laughing Gas. He is a single father to his son, Kennedy T. Mobley and currently resides in Hollywood Florida.

You have subscribed to alerts for Keldrick T. Mobley.

You have been added to Keldrick T. Mobley's favorite list.

You can also sign-up to receive email notifications whenever Keldrick T. Mobley releases a new book.