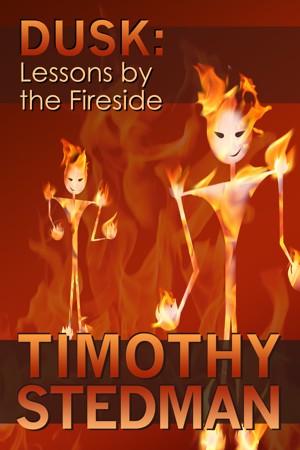 Dusk: Lessons by the Fireside

By Timothy Stedman
Rated 5.00/5 based on 2 reviews
An average day for bartender Ellison until the first of the attacks. Neach has some newfound, atypical abilities, and someone is taking notice. He will be on the run from some, befriend others, and question the notion of trust while becoming the force from within. What path will he choose? Power? Honor? Indifference? What about the price involved? That is a choice he will have to make on his own. More
It was an average Tuesday for N. C. Ellison, Neach, closing down the bar, but then came the attacks that changed everything. A simple mugging started it, but multiple attacks from different sources confirmed it. Neach has some atypical abilities. Join Neach during the first steps into his new world as he is forced to stay on the run from the authorities and a number of other unknown hunters while trying to understand what he has become. He will meet many others on this path, others who will help him, others who will hinder him, and others who claim to know him from some other life. But who will he trust, and how will his decisions ultimately influence the force that he can become. While learning about the height of his new skills, he must also face the horrible price that comes with such power. What path will he choose? Honor? Indifference? Immortality? That is a choice that Neach will have to make on his own.

Timothy's story is too long to tell and not very interesting, so lets fast forward to his involvement in this book. It started with a severe traumatic brain injury (I do not advise cleaning your own gutters even on a one story house) Fortunately, he lives in Atlanta just a short ambulance ride away from one of the best brain doctors in the country and near Sheppard Center, one of the best facilities in the world to treat brain injuries. After a week in an induced coma, multiple weeks at the Sheppard Center, and another few months on outpatient therapy, Timothy went to DragonCon, brain still seriously on the mend. While there Mark Sheppard, (Firefly, Doctor Who, Battlestar Galactica, et al) no relation to the Sheppard Center, spoke alone on a panel. While discussing Joss Whedon and the Whedonverse, Mark made the comment '"If you have something to say, a story or a script, just write it down. It'll never happen if you don't write it down." Timothy then decided to write a book. Fast forward to New Mexico September 2010. While keeping a running journal of his crazy, figuring out his brain again journal, Timothy put some strange ideas into nature, people, life, and everything. This journal eventually morphed into a blueprint for the Fires of Pi series. Over three years of writing and working in the real world, book one was finally completed.
Timothy is typing this personal Bio (in the third person, come on, brain injury) again in New Mexico at Ojo Caliente. Timothy was able to accomplish this feat with the support of his family, his EAV neighborhood, and his friends both far and near.

Really enjoyed this story. Great character development, great ending (which could have gone the predictable route but didn't). You feel like you're struggling right along with Neach trying to make sense of this new world around him, who is playing whom, what to do next. Can't wait for part two!

It was an average day in the life bartender Ellison, but if you ask him, he'd prefer to be called Neach. Upon leaving, Neach is attacked my wallet thief on the streets and after being beaten to a pulp, Neach awakens. One might even say, he has a new SPARK in life or a new BURNING passion. Through use of his new abilities he meets and must trust a new group of friends who confuse him completely, but he must stick with them and stay on the run. But from what? Who has he awoken to be? What will this new power do to him? All of those question will be answered if you read this book. This was a wonderfully enjoyable read and if you are a fan of sci-fi or fantasy then you are in for a treat. The book is a wonderful look at life, from the human psyche to the first law of conservation of matter and it goes much further than that. Stedman is a master of words in his novel Dusk: Lessons by the Fireside. Pick up your copy today!!!

You have subscribed to alerts for Timothy Stedman.

You have been added to Timothy Stedman's favorite list.

You can also sign-up to receive email notifications whenever Timothy Stedman releases a new book.