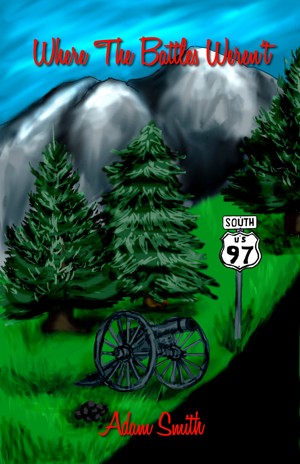 Where the Battles Weren't

Adam Smith, author of “Where the Battles Weren’t”, was born on April 5, 1978
in Louisville, Kentucky. He was adopted as an infant and also grew up on a large farm in
western Kentucky.
Adam is a 1996 graduate of Apollo High School in Owensboro, Kentucky, and he
graduated from the University of Louisville in 2000 with a bachelor’s degree in Political
Science.
After college, Smith was a deckhand on oilfield supply boats in the Gulf of Mexico,
working two week shifts and commuting to his studio apartment in Palm Springs,
California.
In 2004, Adam was the Democratic Nominee for U.S. Representative of Kentucky’s
Congressional District, eventually losing to the incumbent in the general election.
During his campaign for Congress, Smith was Kentucky’s most outspoken critic of
discrimination based on sexual orientation, putting his principle beliefs ahead of his own
political ambitions.
Permanently disillusioned with the modern political process, Adam went back to
work in the oil patch, this time as a mud logger on drilling rigs. Adam spent much of his
time immersing himself in the diverse cultures of Houston, Austin, San Antonio, Laredo,
Shreveport, Lafayette, Morgan City, and New Orleans. While working in south Texas,
Adam made numerous trips across the border, notably to Monterrey, which quickly
became one of his favorite destinations. Although no longer employed in the drilling
industry, the people he met while working in Louisiana and Texas made a permanent
impact on his life.
Smith has worked as a courier in Los Angeles, a valet in Palm Desert, and as an auto
parts delivery driver for a junkyard in Coachella. He spent the 2011 harvest season in the
Great Plains hauling wheat, canola, and soybeans.
Adam enjoys relaxing inside of a cozy tavern on snowy winter nights in the Midwest.
He likes watching the sun come up over the Coachella Valley on warm summer mornings.
His passion is sitting in the outfield bleachers, cheering for the St. Louis Cardinals on humid August evenings at Busch Stadium.
Smith currently hauls coal in southeastern Illinois and lives on a farm in Stanley, Kentucky.

You have subscribed to alerts for Adam Smith.

You have been added to Adam Smith's favorite list.

You can also sign-up to receive email notifications whenever Adam Smith releases a new book.