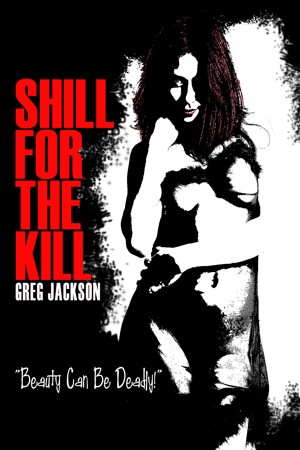 Shill for the Kill

Until Jack has a clandestine meeting with an unsatisfied, curious New Jersey housewife, Elle Parker, an aficionado of Detective stories who has an uncanny resemblance to Jack's missing girl.

Together, they try to piece together the dark web of deception, racketeering and murder, where Elle might just need to become the Shill for the Kill!

Greg Jackson is a freelance writer, author, artist and graphic designer. He is the author of eight novels and counting. Ever since he was a kid Greg's wanted to be a writer. His imagination is always on overdrive, courtesy of growing up as a child in the Star Wars generation. There rarely is an idea that can't be turned into a plot, no matter how odd. He decided to work from home as a graphic designer to raise his son as a single parent. He soon began his writing in 2007. Operation Mistletoe was his first novel and soon every shipment in Waldenbooks sold out over the Christmas season in the upper northwest region.

Greg's books span several genres of fiction, from science fiction and flash fiction short stories to bitingly sarcastic satires. He publishes several online stories to Authors Den and owns lankymania.com, where he accepts and lists books from other independent authors to promote independent writing by sharing exposure to fans.

Greg's imagination is still on hyperdrive and his love for movies is still going strong. His books have been said to read like movies and it only reaffirms what he loves to do: entertain and inspire through imagination. And no matter what, he's inspired his son to start writing and telling stories, which is possibly the best thing that can ever happen.

Shill for the Kill - Book Trailer
Shill for the Kill is the newest crime novel from Greg Jackson. Set in 1938 New York, it centers on the down-and-out private eye, Jack Chambers and his quest for a missing socialite. With the help of a New Jersey housewife, Elle Parker with a penchant for pulp crime stories and an uncanny resemblance to the missing girl, they dive into the seedy underbelly of New York, where anything can happen!

You have subscribed to alerts for Greg Jackson.

You have been added to Greg Jackson's favorite list.

You can also sign-up to receive email notifications whenever Greg Jackson releases a new book.