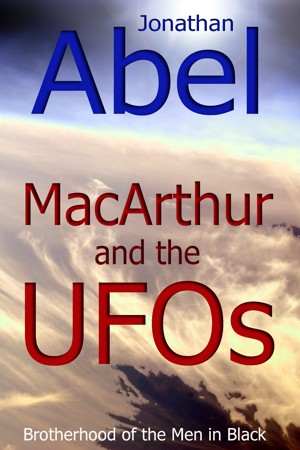 MacArthur and the UFOs

Flying saucers were daily headlines and wartime President Roosevelt actually saddled General Douglas MacArthur with solving the growing UFO question – who and what were they? Can we retrieve and back-engineer a crashed alien spacecraft for battle before the enemy could!

This eBook and dimensional radio drama AudioBook, read by the author, reveal --

Documented origins of the heroic Men in Black amidst global warfare!!

And the TWO greatest secrets of WWII!

Why did the author take on this topic?

He was compelled to track down the origins of this incredible statement - in a speech at a 1955 West Point graduation, General Douglas MacArthur actually spoke these words --

His first job out of school was as News Director of KHAI Radio, Honolulu. Jonathan Abel’s newsroom window on the 3rd floor faced Pearl Harbor and as he wrote news copy, he could imagine the Japanese planes approaching over Ewa Beach, over cane fields and the little village of Aiea on that sweet, Sunday morning in 1941...the "sneak attack" that drug America into WWII.

In 1970, he took a job offer from the news department of KGMB and covered the filming of Tora! Tora! Tora!. It was that station’s powerful radio signal the Japanese aggressors had used to guide them to Pearl.

Currently, he writes and produces media for the Department of the Interior…our national parks, dams, power plants…the Air Force Academy, Grand Canyon National Park, and pieces for the Apache, Navajo, Hopi and Nez Perce Nations. He values his trips to the reservations and meeting those incredible people.

He was Creative Director for Motorola while they were the largest high-tech corporation in the world and actually invented the term “Multi-Tasking” to promote the VME-10, the first computer in history that would do two things without completely rebooting. A few years later, in 1985, he wrote a script that meant renting Stonehenge for three days to produce a documentary on his notions of it being a multi-tasking star computer.

Most recently, Jonathan Abel spent a month and a half in a research station in the Amazon cloudforest successfully photographing and documenting three varieties of Poison Dart Frogs and the mating of rare, Glasswing Butterflies.

MacArthur and the UFOs
This true, epic WWII adventure chronicles MacArthur's creation of the original "Men in Black" to investigate and retrieve UFOs for warfare. Experience the Battle of Los Angeles and the Phoenix Lights first-hand! All voices in this video and the acclaimed "3-D" AudioBook are by the Emmy and NY Film Festival winning Author... Notice: Portions are downright scary, OK?

You have subscribed to alerts for Jonathan Abel.

You have been added to Jonathan Abel's favorite list.

You can also sign-up to receive email notifications whenever Jonathan Abel releases a new book.