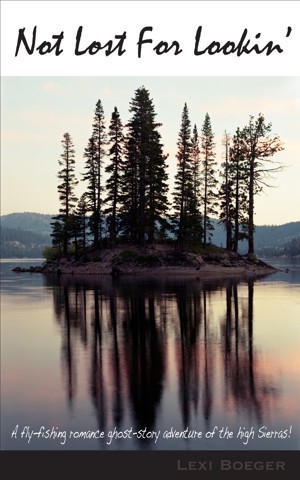 Not Lost for Lookin'

In a nutshell, and if I can remember most of it, well fuck it- let's just hit the highlights: I am a writer, artist, yarn spinner (yes both literally and figuratively), canoer, fly-fisherman, folklore hunter, dive-bar'er, pool playing old truck driving whisky drinking wine maker's daughter. I don't understand poetry but if I had to make my best guess I'd say that when you only use a few words they have to be perfect. That's why I'm not a poet. I like to use lots of words and the wronger the better. I have two kids, they are stunning. I like old books, old country songs (good or bad), old things, creaky leather, running water and fine coffee. I can make carnitas from scratch and don't even get me started on pumpkin. I take honey and cream in my coffee. I take my coffee in a diner mug. I prefer bank-eight to straight and like 600 thread count sheets. I have 5 pillows and two cats one is named Gravy.

Lexi Boeger lives and works in Hangtown, California. She is a professional artist and writer and has built an international career as a yarn-spinner (yes, yarn). Her work is in both private and museum collections. For more on this Google: pluckyfluff or Lexi Boeger.

She has written three books on art, craft and the creative process in yarn spinning. These are available at the usual places.

Not Lost for Lookin' is her first fiction. Boeger is qualified to write on the topic due to her 39 years of running amuck in the foothills of the Sierra Nevadas; fishing, loving, losing and raising hell since 1974.

Boeger is currently focusing on fiction writing and community non-profit work in her hometown.

Not Lost For Lookin’s brilliance almost lost to poor presentation

“Thank you for writing this book, Lexi Boeger. I appreciate your commitment and the time you put into this worthy endeavor.

The first thing I noticed about Lexi Boeger’s e-book, Not Lost For Lookin’ was it was poorly formatted. This despite the fact that amongst the front matter of the book she credits a website for formatting it for her as well as someone who served as an editor for the manuscript.

Boeger doesn’t use quotation marks to indicate dialogue. Her dialogue is not connected to speaker attributions – there’s dialogue and then full stop; then the next sentence might begin with “Says”.

The more characters that are introduce as the story unfolds the more difficult it is to understand whose saying what. It takes the reader out of the reading experience and that’s a bad thing.

I was further confused by Boeger’s style of not indenting at the beginning of a paragraph but then indenting for dialogue.

Boeger is also fond of long paragraphs when now days most authors adhere to the unwritten rule to paragraph every three sentences. With today’s reader being use to abbreviations and sentence fragments in emails and on social media most authors avoid presenting the reader with blocks of solid type that can be intimidating.

Quotation marks, other punctuation and indentation are used to help the reader understand the text. It’s not something invented to frustrate the author, inhibit their creativity, or stifle their voice.

When these conventions are abandoned it becomes difficult, at least for this reader, to understand and enjoy their story.

Sometimes formatting can be skewed by the publisher. Sites like Smashwords and Amazon give specific instructions on how to format your manuscript before uploading. I know this can be challenging, but authors owe it to themselves, their work and their readers to take the time and patience to get it right.

Despite these annoying distractions I persevered and was glad of it. Not Lost for Lookin’ is an astounding novel.

It’s a story is about a woman, Rose, who’s marriage and life are “breaking down and unraveling and upturning”. Fly fishing for her and her family is about traditions, about “routines, habits,” it’s their “Modus Operandi. Unchanging and unfailing. Predictable.” Rose goes fly fishing to escape the turmoil in her life.

One day she is driving to a remote fishing spot and comes upon Glory, an enigmatic young woman in the middle of nowhere. We soon discover that Glory’s situation is similar to Rose’s.

The two of them become friends and eventually hook up with two disreputable but likeable fellows for hard drinking and reflective fly-fishing. As Rose’s marriage implodes she draws closer to Glory and their new male cohorts. When Glory’s mysterious past is revealed it defies love and logic.

Boeger writes about magic and her writing in some places is magical. Her imagery of the creeks and canyons she’s fished is like an impressionistic painting, vivid yet indistinct, coalescing in your imagination. Her descriptive passages go beyond what can be seen and include the mood of a place, it’s personality, it’s desires, it’s demons. To her landscape is a character, an important one that you get to know intimately.

Some of the fly fishing narrative morphs into kind of a flow of consciousness. There’s a fine line between a meaningful creative flow and a rambling bunch of nonsense. Occasionally, Boeger crosses the line, but most often I was swept away.

Boeger’s characterization is through action which is good since at the same time the plot is advancing. There’s a lot of tough talk and a great deal of profanity. Most times Boeger’s diction is astoundingly perfect, but there were instances I thought she used the f-word because she was too lazy to think of more appropriate adjective. Believe me, it’s not that she can’t.

Endings to literary novels don’t have to bring resolution, but with so many options open to the author I was disappointed and unsatisfied with the bizarre ending she chose.

I downloaded this book free from Smashwords as part of an ongoing commitment to review new, self-published authors.

You have subscribed to alerts for Lexi Boeger.

You have been added to Lexi Boeger's favorite list.

You can also sign-up to receive email notifications whenever Lexi Boeger releases a new book.