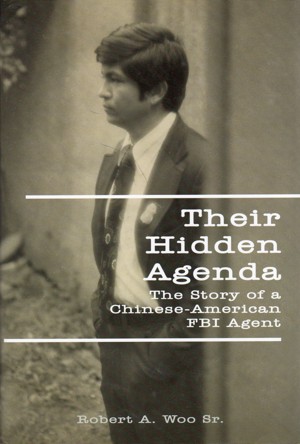 Their Hidden Agenda, The Story of a Chinese-American FBI Agent

By Robert Woo, Sr
It is every boy's dream to become an FBI agent, a career filled with adventures and excitement as shown on TV, but for Robert Woo, a former FBI Special Agent, there's something else to the package: betrayal.

My father, Hu Zhiming (deceased) was born in Nanjing, China into a wealthy family aligned with a powerful warlord, Wu Pei Fu, in the southern part of China, during the two decade period known as "The Warlord Era" in the early 20th Century. He immigrated to America in the late 1930s, at the time that Nanjing, China was under siege by the Japanese. He met my mother, Lucrecia Rozo Gaitan, who was from Colombia, South America in 1945 and they married in May 1946, and had three sons of mixed ethnicity. My dad (unknown to us) supported his family in China by virtue of his success as a restaurateur, and maintained contact with them throughout the 3 decades from the time he departed China until his return in 1974. I am the middle son, Robert.

We had a typical American upbringing within the framework of the Catholic faith (mom's Catholic roots), and I eventually entered the US Naval Academy and graduated in 1970, and served two deployments in the Viet Nam conflict. I fulfilled my 5 year service obligation and was honorably discharged and entered government service as an FBI agent in 1976, due to my background, education and language capability, or so I thought.

My career as an FBI agent was at times exciting, fulfilling, and perplexing, but mostly stressful, as a result of the fact that the FBI had maintained a national security file on my father, even before I entered the agency, based upon his family in China and his contacts with officials of the Chinese government. Today’s novel Pandemic, which has affected our country in so many ways, and for us of Chinese descent, in particular, as the targets of hate and racism. My story, in effect, puts a spotlight on why I was treated in the manner in which I was, during my career as an FBI Agent, despite my contributions to my country, at times risking my life. Therefore, it appears that my story is not just an isolated incident but a fact of systemic racism, even within our institutions, even to this day. My story reflects the anti- Asian and indeed hate crimes against people of Chinese origin, in our country, especially in cases involving Chinese- American scientists targeted by the FBI, because of their race.

Eventually some of his family were also able to immigrate to the US, as a result of his efforts, as well as numerous other Chinese immigrants, who without my father's assistance would never have been able to come to America. He basically interceded on their behalf on numerous occasions with high level US officials, whom my dad had befriended, while he was in the restaurant business. My dad estimated that he helped more than two hundred families immigrate to America.

In 1987, I was interviewed by the FBI about my father's contacts with the communist Chinese and I became increasingly paranoid about my career, and that combined with a repressed form of PTSD (post traumatic stress disorder) from my Vietnam experience, I unwittingly became a compulsive gambler, and I entered a dark period in my life.

In 1994, the FBI charged me with criminal offenses (a result of a well orchestrated plan they implemented to set me up using my "weakness"), and I was suspended for more than 2 years. I was reinstated with the charges dropped but after less than 6 months back at work, they decided to end my career in 1997, using trumped up charges, and just 7 weeks within my eligibility for retirement.

Fortunately, I had begun attending GA (gambler's anonymous) meetings, at the urging of my family, while on administrative leave, and developed the emotional and spiritual strength to arrest this devastating illness, notwithstanding The FBI's relentless efforts to destroy my career, reputation and spirit. However, somehow I managed to persevere, and to get my story published.

In November 2009, I received new information from documents which I had in my possession since I was discharged by the FBI, that there were two sets of documents which were used to make the decision to first suspend me for more than two years (July 1994 - August 1996), then ultimately to fire me. I did not have access to these files which were kept in storage, however, a close associate of mine carefully analyzed them and came to the conclusion that not only were different documents maintained on practically identical facts (suggesting that the other set of documents were used to make it easier to fire me by headquarters officials). However, based on this fact, it appeared that certain key officials who were instrumental in having me fired, also committed perjury while under oath, based upon what actually occurred in the context of the facts surrounding my alleged wrongdoing, and their testimony about these facts. On my way back from Christmas (2013) from my daughter's home in southern California, I stopped with my family at a gas station and met a family from Nanjing, and when I told them my father's name, they said he is still quite "famous" in the city of Nanjing, a testimony to his lasting legacy not just in America but abroad, as well.

After a tumultuous time, trying to make ends meet, since being discharged from the FBI, I’ve found true peace and serenity in my life, with my wife of almost 49 years, and my children and grandchildren. I found a steady job at the Tesla factory in Fremont, CA, and have embarked on a new career, and am respected and trusted in my job. I regularly attend Mass at a local church and have also made peace with my Creator. When I write again, it will be to help people who are struggling in matters of life and faith. However, this past September 2020, my daughter's cancer resurfaced, after an almost 10 year hiatus, and I took a leave of absence from work, to help care for her.

So, the latest chapter of my book, took the form, once again, as a caregiver, which I had learned to become, while caring for my dad, from February 2004, until his death in June 2006, back in Hyattsville, MD, where my parents had moved to, from our home in Washington, D.C. I also cared for my mom during that time, so those skills seamlessly transferred to my daughter and her needs, so I consider myself blessed, in that regard. Just yesterday, July 9, 2021, my daughter's oncologist gave us very promising news about her recovery from a second bout of cancer, that the cancer had not spread and actually decreased. More importantly, if she continues on her recovery protocols, she has a chance for the cancer to enter into "remission" again.

I've decided to write my story and that of my family's in two separate books, as they are really separate and apart from each other, although inextricably connected. My dad's story is note worthy, in my belief as a story of its own, given the nature of his homeland, China and the turmoil, in which he was brought up in feudal China, which collided with the modern era. The first book, entitled, "Their Hidden Agenda, The Story of a Chinese American FBI Agent", will remain intact, with some minor corrections, to make it more of an upbeat story of how I was able to find redemption, after my experiences with the government, rather than focus on the negative aspects of that experience.

The second book, entitled, "The Hu Dynasty, from Nanjing to Washington D.C." will encompass the entirety of my dad's story, with my mom's in going from his life in China, to how he was able to establish himself, and thrive in America, just after WWII.

Reviews of Their Hidden Agenda, The Story of a Chinese-American FBI Agent by Robert Woo, Sr

Review
Marcia Perguidi reviewed on July 23, 2011
(no rating)
The only complaint I have is with Smashwords. I have tried 3 times or more to download to my Kindle but it keeps going to my PC.

I have only read a portion of the book but am really intrigued by the story line. I know this author personally and he is a good man and does not deserve the treatment he got
from our government.

You have subscribed to alerts for Robert Woo, Sr.

You have been added to Robert Woo, Sr's favorite list.

You can also sign-up to receive email notifications whenever Robert Woo, Sr releases a new book.