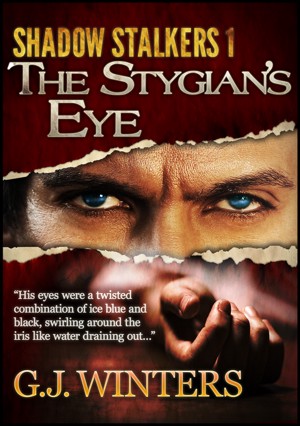 By G. J. Winters
Darian Lane moved into a small town from a busy city life. Finally free from the chaos, being thrown in the middle of a robbery was the last thing he wanted. And he sees a glimpse of evil that changes his life forever.
He ends up in a coma and wakes up unable to recall anything. Dark dreams haunt him and shadows lurk at the corner of his eye. What are they? What could they possibly want from him? More
From the Publisher that brought you popular short story series Witching Call, Hostile Hearts, Earthbound Angels, The January Morrison Files Psychic Series, Ralph's Gift, Seasons of Love, The Taken, Requiem for a Dream, In the Blood, A Halloween Awakening, Friend Zone, The Magaram Legends, and now, The Shadow Stalkers Series...

MYSTERIOUS SHADOWS ARE LURKING
ONE CANNOT UNSEE THE FACE OF DEATH

Darian Lane moved into a small town after growing up in a fast-paced city life. Finally away from the vices of the city, being thrown in the middle of a robbery was the last thing Darian wished for. But as he finds himself in this unfortunate incident, he sees a glimpse of evil that changes his life forever.

Darian ends up in a coma and wakes up unable to recall anything. Dark dreams start haunting him as visions of his last memories slowly come back. Mysterious shadows lurk at the corner of his eye. Inescapable nightmares start to feel too real. Lines between reality and dreams are blurred.

On his way to recovery, Darian meets Jennifer, his physical therapist who is assigned to work on getting him to walk again. There is an unmistakable attraction that binds them together, and the two cannot help but give in to an inevitable tryst.

But as Darian struggles to resolve his nightmares, these shadows seem to linger. What are they and what could they possibly want from him?

EXCERPT
The man with the gun stood still and glared at Darian. His eyes were a twisted combination of ice blue and black, swirling around the iris like water draining out of the bathtub. Darian stood shocked for a moment and blinked his own eyes a couple of times to make sure he was seeing what was really there and not some figment of his imagination. The man turned back to yell at Lacey one more time and then stared into Darian’s eyes again.

“You did this to yourself, you little bitch.”

The man said this in the calmest and most collected voice Darian had ever heard. He stared directly at Darian as he lifted the gun up to shoulder height and pulled the trigger.

The sound of the gun was deafening in the small gas station. The muzzle flash briefly blinded Darian as he tried his best to fall to the ground for cover.

Three more shots rang in the distance as his ears tried to recover from the first gun shot, and Darian could feel the spray of some kind of liquid as it hit his face and hands. He imagined a bottle or water or something sitting on the counter being hit by one of the bullets and hoped that Lacey had moved back enough to not be hit by a ricochet.

There was a momentary scream and then a sharp pain on the top of Darian’s head before the blackness set in.

Download and discover why readers are raving about G.J. Winters.

G.J. Winters “fell into” writing when a well-meaning teacher of his submitted his Creative Writing assignment for publication in the school paper. The local paper picked up the article and asked G.J. for publishing rights, to which the young G.J. agreed with some hesitation, as he felt “that wasn’t one of my best writings at the time.” The reality was that this article was written when G.J. was a junior in high school.
The article, which was a fictionalized version of a local myth surrounding a famous abandoned house near a swamp, was an assignment turned in as part of a mid-term exam. The teacher, Miss Mendez, thought G.J.’s writing was “exemplary” and showed “natural, raw writing talent for a person his age." The assignment called for “providing details to a local urban myth – provide background, using a local resident’s POV, and close with a vague hint of authenticity and realism."
The story, entitled “The Old Mansion by the Swamp,” appeared in the high school paper as a short story, but was later serialized in the local paper in 6 parts. G.J. added more characters and even a sub-story (which later became a story of its own, “I Was Shirley Massey” – a story which centered on a member of the fictional family who resided in the Massey Mansion in the late 70s and disappeared without a trace).
With the success of both of his original series, G.J. thought to venture into writing longer stories, this time with futuristic themes, as he has always been fascinated with travelling through time, future crimes, apocalyptic themes, and stories set in civilizations from the future.
G.J. identifies with sci-fi writers such as Isaac Asimov (“Kept me awake through most evenings in college.”) and Margaret Peterson Haddix (“My girlfriend at the time had fits of jealousy over my fanatical tendencies towards this author.”).
G.J. holds a degree in Chemistry, is an intern at the R&D division of a pharmaceutical manufacturing company, and lives with girlfriend Deidre, a magazine editor.

You have subscribed to alerts for G. J. Winters.

You have been added to G. J. Winters's favorite list.

You can also sign-up to receive email notifications whenever G. J. Winters releases a new book.