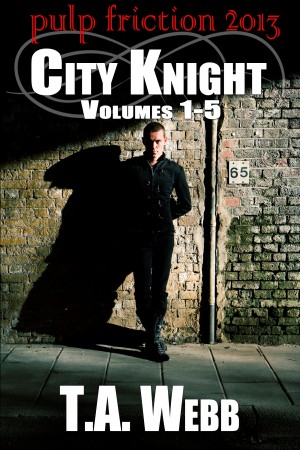 Marcus felt a single tear run slowly down his cheek. “No, baby, you have that wrong. It was Sir Benjamin who rescued Sir Marcus.”

Benjamin kissed the tear away and whispered, “They rescued each other. But, baby, it’s not the end. With you, it will never be the end.”

T.A. Webb is the writing name for the Mean Old Bear That Could. By day, he's the director of finance for a non-profit agency. He's worked with people living with HIV/AIDS and with children in the foster care system for over twenty years, and takes the smaller pay for the chance to make a difference for those who can't help themselves. After hours, he's the proud single papa of four rescue dogs, was born and raised in Atlanta, where he still lives, and is a pretty darned good country cook.

His sister taught him to read when he was four, and he tore his way through the local library over the next few years. Always wanting more, he snuck a copy of The Exorcist under his parents' house to read when he was eleven and scared the bejesus out of himself. Thus began a love affair with books that skirt the edge, and when he discovered gay literature, he was hooked for life.

T.A. can be found at Facebook under AuthorTAWebb, tweeted at #TomBearAtl, or if you really want to, you can email him at AuthorTAWebb@aol.com.

You have subscribed to alerts for T.A. Webb.

You have been added to T.A. Webb's favorite list.

You can also sign-up to receive email notifications whenever T.A. Webb releases a new book.