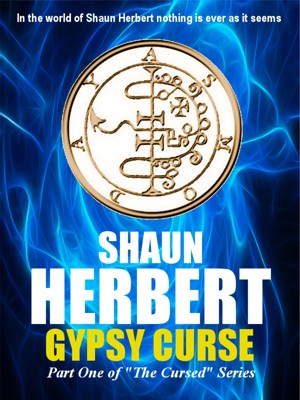 By Shaun Herbert
A supernatural story with a twist... Gypsy Curse is an introductory tale that sets up the plot for Descent into Damnation and The Hand of God, which follow... More
When Jack Edmunds, a reporter for the Daily Tribune visits the quiet backwater village of Ellsworth, North Yorkshire he gets a little more than he bargained for.

Witness to the casting of an ancient gypsy curse following allegations of corruption by the authorities – Jack along with Suzie Brown, his accomplice, are drawn into an ever increasing maelstrom of events and strange happenings beyond belief.

Cut off from the outside world the village of Ellsworth rapidly descends into a bizarre blood-bath of demonic possession as friend turns against friend in a frenzie of unstoppable carnage.

Can Jack unravel the mystery and save the day before the village is reduced to population zero or will the curse prevail?

Only time will tell.

Shaun was born in the mining town of Barnsley, South Yorkshire, England in 1967. In 1968 the family moved to London before emigrating to South Africa in 1970, where he lived for two years, returning home in the winter of ’72. Shaun stayed in the Barnsley area until he moved to Wakefield (his adoptive town) in his early twenties, where he’s lived ever since.Divorced in 2013, he is happily settled with his fiancée, Joehana a beautiful Filipino National with a wonderful smile.

Shaun’s pastimes have been somewhat eclectic over the years. Art has always been a favourite hobby and his desire for creativity has flowed into many ventures. At fourteen he studied Goju-Ryu karate for eleven years attaining his “1st Dan Black Belt” at nineteen. In his early twenties he went on to play guitar as a semi-professional musician for a six year period in hard-rock venues across the country. Apart from writing, Shaun likes reading, painting watercolour and surfing the net with a vengeance…lol

At forty-four, in 2011, he reduced his working hours from full to part-time enabling him to devote more energy to writing. His work is now published across the world and available in many formats.

You have subscribed to alerts for Shaun Herbert.

You have been added to Shaun Herbert's favorite list.

You can also sign-up to receive email notifications whenever Shaun Herbert releases a new book.