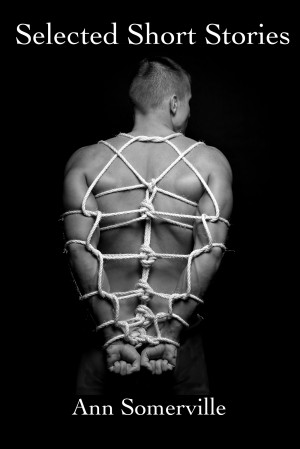 Stories included are:
Time Out
Tom and Sean
Autumn Rains
Fire, Fire
Going Away
The Gift of Giving

Review
Clodia Metelli reviewed on Oct. 17, 2011
(no rating)
The first two stories in this collection centre around the characters of Tom and Sean. For the most part, I adored them.

A dedicated nurse at a London hospital, Sean is also a joyful submissive with a subversive sense of humour and a healthy streak of masochism. His lover, wealthy corporate lawyer Tom, is the perfect master - cruel, caring, attentive and ingenious. On another level, the two are simply lovers, who talk and joke freely and intimately. Their dynamic and the play between them was delightful - then something happened that squicked me personally, though I accepted that Sean enjoyed it well enough. Skipping over the bit that squicked me like a responsible adult, I made it to the end of the story.

I confess the ending jarred me slightly, though I don't know what the alternative could have been. That Sean who spent his life caring for others should have to be the recipient of beneficence to have a decent standard of living grated on me, but that sadly is the current reality.


The second story, Tom and Sean describes how the two got together in the first place - I was delighted to have another helping of them! The story was convincing in the vividness of its various London settings and also there was a lovely bedroom scene.

I was intrigued by the shorter stories that filled the centre of the book, but none of them individually stand out in my recollection. The author shows a wonderful interest and compassion for all sides of life, particularly the less fortunate (this showed up for example in Sean's thinking about the lonely death of a patient, but not sharing this with Tom out of instinctive respect for the patient's privacy).

This aspect of the author's writing showed through particularly in the last story, set in London around Christmas time, when a self-absorbed, Christmas-hating individual learns the joys of helping others, when he meets a man who is recovering from a very difficult past. A reworking of the Christmas Carol motif that is romantic and life-affirming without being at all cloying.

Overall
As a collection of short stories, this was a nice mix. It allows new readers to get a varied taste of what Somerville is capable of, and for free to boot! I read these out of order (skipping the first two then going back to read them, merely because of time constraints at the time). Two of the stories are merely a snapshop of a scene or a element of a man's life and are enjoyable but leave more questions asked than answered, which isn't a bad thing considering what they're made to do. Three of the stories are a medium length with enough time to develop a small plot and a few characters and evoke some powerful emotions. There is one long story, which is the first of the bunch. I break down my thoughts on them below. PS. A simple and yet lovely cover.

Time Out
If I were ranking this story alone, it probably would have earned 3 stars. While I enjoyed Sean's perspective and Somerville's writing, there were a few things that didn't speak to me. One, while a fan of BDSM, there was one extended scene (the last one) that I had to quickly skim over because it's just not to my taste (that is no fault of the author). Afterward, Somerville amends any squiggled hearts (that'd be mine) and it's okay. The events fit with the characters and what the characters want/need, but it's a personal thing. Also, the narrator constantly uses more official/medical terms, which could be because he's a nurse, but I still blinked every time. (Odd how when you spend time in a genre it's the proper name for things that make you blink.)

Things I liked about this story include the writing, the characters (Tom and Sean are lovely!), and the little things that let the reader see how much they care without having to say it aloud. Sean's insecurities that are just under the surface but don't bubble up too often, Tom's protectiveness that never becomes overwhelming, their date out on the town and their first two scenes, one of which involves creative use of ginger. (You'll have to read to find out ;))

I was curious about the time period of the stories. I know they take place after 2001, but they feel like they belong in a more conservative realm. Of course, I'm not as familiar with London/England as I am with U.S. perspective on everything, so I'll plead ignorance (sorry). I suppose I assume that European countries are more advanced than us...

Tom and Sean
This story throws us into a time with Tom just before he meets Sean, when he is rather lonely, out of a bad relationship, and too busy working for a relationship. He accidentally meets Sean, who is nothing what he expects and he's perfectly happy with it. It was nice, after seeing how their relationship has progressed and how stable they are, how everything got started. One hot sex scene that indulges both their needs and hints at what more is to come.

Autumn Rains
A very short story focused around a rainy picture and an umbrella, the story mainly deals with the narrators frustrations over an umbrella he lost and the man he lost with it. The end left me wiggling and wanting more (in a good way), although I imagine nothing more will be coming of this. The narrator was fun and a little flamboyant, adding some light to a rather sad story...although there is always potential for a happy ending, isn't there?

Fire, Fire
Probably the oddest of the bunch, this one switches perspectives every so often as it follows a group of people who approach a man standing at a fire barrel. Although we learn little to nothing of the man, we see a varied bunch of people who he meets. A good study of humanity.

Going Away
While this one toes the line of the classic dead-boyfriend trope, it was handled well and short, and sweet, enough that we aren't bored.

The Gift of Giving
This is my favorite, which may just show that I'm a sap for sweet Christmas stories. Regardless of my sap situation...we are introduced to our not-Scrooge narrator, who is alone for Christmas, like he is every year. A chance meeting at a museum leaves him curious about a handsome and artistic man whom he follows to a soup kitchen. While this story could come across as heavy handed, I never found it that way. The characters have clear motivations and are lovely and tender and hopefully willing to grow into their feelings for each other. I can imagine them having many happy Christmases in the future (you know, not to spoil you, but it is a Christmas story).

I really enjoyed this diverse collection of stories. For me it was the last two short tales that were the most appealing, but the whole collection was nicely written with well developed characters and great realism throughout.

REVIEW MAY POSSIBLY CONTAIN VAGUE SPOILERS TO THE STORY TIME OUT.

Other review mentions Time out and I will be mostly talking about it too, since this is the longest of the stories in this lovely collection and probably my favorite. I find this story one of the sweetest BDSM themed stories I have ever read and I do not mean that BDSM in this one is all that light. I just think that Ann gets in Sean's head so well that I am never in doubt that he wants it and why he wants it. I wish some other writers who write BDSM would understand that when you do not show psychological need both dom and sub have for each other, it may so easily look like abuse. Anyway, I really liked this story, liked how in few sentences Sean is fleshed out as more than what his sexual needs are, he is established as a human being who would go extra mile to ease the sufferings of the patients in the hospital. Of course Tom sounds a little too perfect, but I understood that this is because the person who loves him so much narrates and of course loving eyes tend to not notice the character flaws. And I really liked that the prequel to the story gets us in Tom's head.
Unfortunately and I cannot believe I am saying it, since I am a huge fan of happy endings, I did not like the ending all that much. I mean, why a need to give Sean that extra cookie which indeed to me made it look as if he is a helpless mistress needed to be taken care of? It is as if the strong and independent man reduced to less than he was throughout the story. And the reason I am going on and on about FREE story is because I liked and cared about the characters that much :) Of course I appreciate this gift from the writer, do not want to sound ungrateful, but I need to be honest as to how I feel about this story.

There are two stories which were inspired by pictures, which left me in rather melancholic mood.

Another rather sad but also uplifting story about moving on and new beginning and one Christmas story also are in this anthology.

However two stories about Tom and Sean were my absolute favourites.

Their interplay is fun and very sexy! Tom and Sean is the prequel to this story that shows how they met and got acquainted.

I highly recommend this collection of stories!