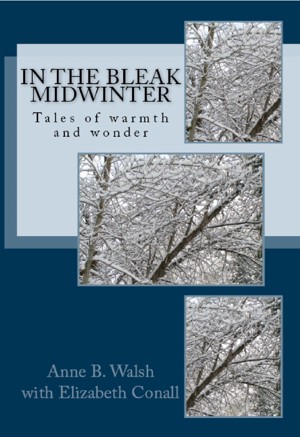 In the Bleak Midwinter

"Frosty Wind Made Moan": Join twins Catling and Kitten on the world of Trycanta as they prepare for their family's Darknight ritual.

"Nor Earth Sustain" (by Elizabeth Conall): If Jetta just keeps trying, can she find her stranded starship's crew a home in time for the holidays? Or is their hope as lost to them as war-torn Earth?

"Enough": Unless twelve-year-old Starsong can prove to the galactic lawkeepers that her abduction from the music-hating planet of her birth was a willing one, she'll be "home" for Christmas.

"With a Kiss": The man who wishes to win Countess Nadia Yastruba must first learn and speak her secret name. As 1786 gives way to 1787, will handsome highwayman Kieran Massey succeed?

"What Can I Give Him?": Gentle-mage Matthias Lecomte is granted his Christmas wish: one day free of his father's hatred...

Well. This collection is much better, as a whole, than "Sing We Now of Christmas", which only HAD one decent story. Four out of five stories in this collection hit the mark.

However... for those who think perhaps they can skip the first collection... that's not going to work. Two stories in this one are direct sequels to tales in that one.

The first one is the weakest in the set, being more of a character snapshot in a fantasy world than a story as such, and the self-imposed limit of 1000 words doesn't let it be fleshed out much. That being said, it IS set in the world of "Homecoming", which I have not read, and uses characters from it. So the fleshing-out probably happened in the novel proper - ergo, if you liked "Homecoming", you'll probably like this tale a lot more than I did. Unfortunately this story hasn't encouraged me to give "Homecoming" a shot as the short stories I've read in Anne's other worlds have, because I don't think it CAN be read properly as a stand-alone; I think you need the background to make it work.

I enjoyed "Nor Earth Sustain". I'm not sure which story world Trycanta is, but it doesn't matter for this at all - it's perfectly comprehensible. I particularly liked the humour ("Jetta Molina. Dutch and Spanish, if you’re wondering, and somewhere my ancestors are laughing, if they’re not still fighting with each other."). And there's a lot more where that came from. A most enjoyably giggle-worthy serious tale. If you can believe that. :)

Ah, "Enough". I am REALLY going to have to read "Killdeer" if it's anything at all like the short stories set in its world. This one has a more imaginative structure than any of the other stories in this collection - the short story in "Sing We Now of Christmas" that it's a sequel to is somewhat similar but this one is far superior; Anne's obviously honed her craft in the intervening time. It's two interlacing stories - one real-time and where the plot happens; and one about the meaning of certain Christmas gifts (trying to keep this spoiler-free) which is absolutely lovely and ties in at a subtextual level. This story is one to savour.

I also enjoyed "With a Kiss" but coming as it did after "Enough" I can't think of much to say about it because my mind was still stubbornly hanging around one tale back. It is a good story with some humour, and it made me curious about "A Widow in Waiting", so it's certainly not a bad little tale. It's just its poor fortune that "Enough" is the best of the bunch!

You may be able to tell which story is my favourite here.

"What Can I Give Him" is the sequel to another tale from Anne's first Christmas collection that I did not enjoy at all. Unfortunately, you're going to have to read that in order to enjoy this one, otherwise you're going to get a little lost. And this one IS enjoyable, and worth reading, and I liked it. She's got rid of the fanfiction base that the first one suffered from via underdevelopment, and made the world her own here. The characterisations in particular are much better, and it's a pretty good story as well.

This collection is worth the buy.