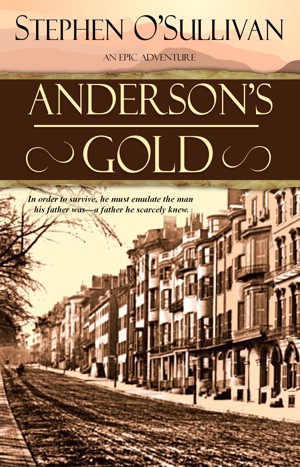 And so begins an epic journey; not just in distance, but also one of self-discovery.

Circumstances force Tom to change as the journey progresses. Under the guidance of his father’s old partner, he learns how to survive, how to read men, and how to kill. He also finds love. But at journeys end, will he still be the same man that captured Katherine’s heart?

Stephen O’Sullivan lives in Dublin City, Ireland. He works as a service technician for an international security company.

He first put pen to paper three years ago when his young daughter asked him to write a story for her. After just a few sentences, he was addicted to writing and hasn’t paused since.

Anderson’s Gold is Stephen’s first novel, but many of his short stories have been published in various magazines and newspapers.

I've just finished reading Anderson's Gold and I really loved it! It has been written with so much eye and love for details; I felt I was traveling through the mountains myself. Stephen O'Sullivan was able to show me a believable every day life of those past and often hard times. Anderson's Gold may be more a Western than a Romance, I - as a woman - have enjoyed every word of it. I'm looking forward to Stephen's next book!

You have subscribed to alerts for Stephen O&#039;Sullivan.

You have been added to Stephen O&#039;Sullivan's favorite list.

You can also sign-up to receive email notifications whenever Stephen O&#039;Sullivan releases a new book.