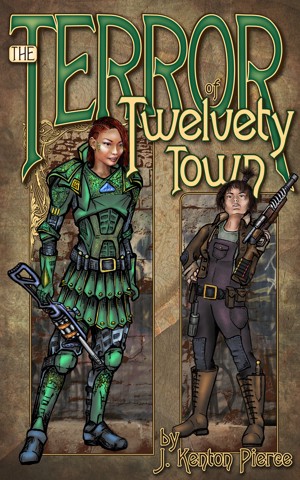 The Terror of Twelvety Town

Oh, and they also say she's on her way to Greenline Town with a wagonload of relics and tech from the war, and a chip on her shoulder.

But Captain Ravati Aziz has guarded caravans, stormed bandit palisades and navigated the treacherous shoals of the New League's fledgling bureaucracy. Surely she can keep one fifteen year old girl from getting into too much trouble...

So what makes a slightly battered but by no means past his expiry date trekkie sit down and start writing? David Gerrold said it best… nobody was writing the stories I really wanted to read. I’d been doing a lot of gaming and over the years I noticed that I was having more fun creating new characters and filling out those frustratingly small character bio screens. My fleetmates in the Star Trek Online guild “TOS Veterans” were starting up some RP stories and encouraged me to beef up my main toon’s bio. What was intended to be maybe two thousand words of character background turned into 25K of story/fanfic.

That’s where I realized that I wasn’t satisfied simply consuming wonderful stories or weaving my characters into other people’s worlds. I spent a summer scribbling odd, half formed ideas, simmering up a story world that had room for the elements I wanted. Well, that and for my original characters in the TOS Veterans fleet who jumped the wall and demanded their own, original story world.

What did I want in a storyworld? A lost colony where post-apocalyptic meets frontier rather than dry wasteland, where steam power exists next to nano-tech, with Townies and ‘Steaders, Pridesmen, and Imps living, loving, and each fighting in their own way against the Long Night, to one day reclaim their world and eventually, their sky.

I suppose that brings us to influences, eh? Too many storytellers to cite for influences, from H. Ryder Haggard and Mark Twain, to Andre Norton and Harlan Ellison, to Joss Whedon and J. Michael Straczynski... And everyone in between.

You have subscribed to alerts for J. Kenton Pierce.

You have been added to J. Kenton Pierce's favorite list.

You can also sign-up to receive email notifications whenever J. Kenton Pierce releases a new book.