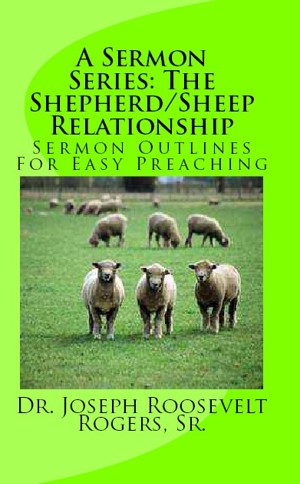 A Sermon Series: The Shepherd/Sheep Relationship

By Joseph Roosevelt Rogers, Sr., Sr
The book share with its readers relevant and biblical sermon outlines that relates to and foundation up psalms 23; the psalm of Prophet & King David.

Dr. Joseph R. Rogers, Sr. was born and reared in Middlesex, North Carolina. He is the tenth of fourteen children born to the late Willie Rogers, Jr. and Pearlie Graham Rogers.

Dr. Rogers served his country in the US Navy during the Vietnam War (1969-71), stationed at the US Naval Base, Mayport, Florida. He was honorable discharged in May 1975.

Dr. Rogers is a graduate of the American Christian College & Seminary of Bethany, Oklahoma earning: A Bachelor of Arts & Master of Arts in Biblical Studies and A Doctor of The Ministry Degree in Christian Education & Counseling.

Dr. Rogers is Co-Founder/Dean and Instructor of The Raleigh Baptist Bible Institute, which offers a Diploma In Biblical Studies.

Dr. Rogers is Founder and Executive Director of J & L Outreach Ministers a non-profit corporation designed to assist the community in all areas of people development, body, soul and spirit.

Dr Rogers is guest columnist for the "Baptist Informer", the state paper of the General Baptist State Convention of North Carolina, Incorporated.

You have subscribed to alerts for Joseph Roosevelt Rogers, Sr., Sr.

Would you like to favorite Joseph Roosevelt Rogers, Sr., Sr?

You have been added to Joseph Roosevelt Rogers, Sr., Sr's favorite list.