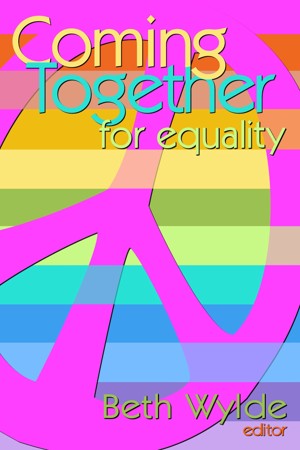 Coming Together: For Equality

Author Beth Wylde writes what she likes to read, which includes a little bit of everything. Her books range in theme from paranormal to contemporary and in pairings from lesbian erotica to straight m/f as well as menage and beyond.

When she isn’t writing she can still be found in front of her computer either plotting, chatting or working on promo. Her first story was published in 2006 and her reviews have been top notch, including a FAR recommended read in October of 08.

Some of her most recent awards include, The Romance Erotica Connection (REC) 2007 & 2008 F/F Author of the Year, REC’s Best Gay short story of 2008 (co written with Cassandra Gold) and she is up for the GLBT author of 2008 award from Love Romances Cafe (LRC) as well as several nominations in the P&E polls.

Beth loves to hear from readers. She can be reached at b.wylde@yahoo.com or for contest info, chat dates and new releases you can visit her at her yahoo group or her websit

You have subscribed to alerts for Beth Wylde.

You have been added to Beth Wylde's favorite list.

You can also sign-up to receive email notifications whenever Beth Wylde releases a new book.