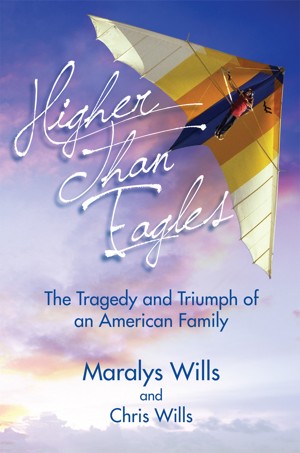 Higher Than Eagles: The Tragedy and Triumph of an American Family

Maralys Wills is the author of 14 books, scattered like birdseed over six different genres. But she can never say which work she likes best. "It's always the last one I wrote."

However, she freely admits that a highlight of her writing career was the critique she received from author Sidney Sheldon. In one of his last letters, he wrote of her writing book, "Damn the Rejections, Full Speed Ahead:" "Maralys Wills, genre-hopper exraordinaire, will make you laugh and cry and laugh again in this gripping, how-to handbook for writers everywhere. She is clearly a force to be reckoned with."

Among Maralys' three memoirs is the recently re-published "Higher Than Eagles," which gathered five movie options (including from Disney),a review in the Los Angeles Times, (reprinted in 56 newspapers), and a visit from the newsmagazine 20/20. "Eagles" is once more in the hands of a Hollywood producer.

Reviews of Higher Than Eagles: The Tragedy and Triumph of an American Family by Maralys Wills

You have subscribed to alerts for Maralys Wills.

You can also sign-up to receive email notifications whenever Maralys Wills releases a new book.