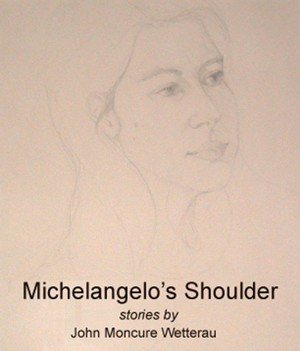 By John Moncure Wetterau
"The line across her eyebrows and tapering along her jaw was right. He'd left out a lot, but that didn't matter. If what was there was true enough, you knew the rest---like a Michelangelo shoulder emerging from stone."

Maine, Seattle, Hawaii, and India are the settings for these beautiful stories of late awakenings, integrity, and persistence. More
A retired CIA officer is confronted by his troubled son. A middle aged woman falls in love with a younger neighbor. An adolescent girl ventures outside her family and discovers injustice. An accomplished grandfather finds love for the first time. A radical environmentalist carries out a final mission. A solitary waitress finds her father.
The stories range across the human and the physical landscape. Two lonely people connect on a dirt road in the Himalayas, dancing to Bob Marley. A financial manager in Seattle finds himself stalking a blind Christian street singer. A Chicago graphics designer leaves his job and begins a new life painting in Hawaii. Many of the stories take place on the coast of Maine.
The author has published four novels and four collections of poetry. These short stories combine the compression and lyrical phrasing of his poems with the character development and the humor of his novels. Each story is its own exploration, original and vivid. This is a book to be savored and enjoyed.
Download: epub mobi (Kindle) pdf more Online Reader
lrf pdb txt
Price: Free! USD
Add to Library
Create Widget
Tags: maine seattle hawaii contemporary dharamsala
About John Moncure Wetterau

Born in Greenwich Village, New York City, but raised, mostly, by my grandparents in Woodstock, a small town in the Catskill mountains. Midway through sophomore year at Hamilton College, an inner voice said, “Get out!” It seemed crazy, but I knew it was the right thing to do. A fraternity brother told me I'd have no trouble finding work on the shrimp boats in Key West.

A friend and I hitchhiked south. Near the New Jersey line we got a ride with another young guy, Pete. "Where you headed?"

"Me, too." He told us that he'd gotten up before dawn in a small Vermont town, thrown clothes and a baseball glove in the trunk, left a note on his girlfriend's porch, and taken off. We rocked on down the coast, listening to Brenda Lee, getting warmer each day.

I left my friends near Miami and went on to Key West. When I got there, I walked to the harbor and asked for a job on the first boat I found that had anyone on board. The captain said, “Shrimp season’s over, kid.” I think he felt sorry for me. He pointed to a rusty shrimper across the water. “He might take you.”

I picked up my bag and ran around to the other jetty, arriving just as the boat began to pull away. A man on deck was doing something with a cable. He wore a sweatshirt and had a two-day growth. “I’m looking for work,” I shouted over the engine.

The winch occupied a large part of the deck, a complicated assembly of giant gears and levers. The strip of water below my feet widened. It was jump or forget it. I had a vision of winching the boat upside down in the Gulf. I shook my head and walked to the Southern Cross Hotel, a wooden building with white peeling paint and a sign declaring, The Southernmost Hotel in the United States.

I wrote it down in a notebook and have been writing ever since. Along the way I served in the Air Force, earned a degree in computer science from the University of Hawaii, married twice, and raised children. The adventures, the loves and betrayals, the teachers, the lessons---they are in my stories and poems, where, like all writers, I have tried to make of my deeper bio something worthwhile. 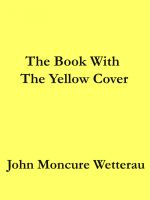 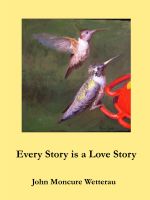 You have subscribed to alerts for John Moncure Wetterau.

You have been added to John Moncure Wetterau's favorite list.

You can also sign-up to receive email notifications whenever John Moncure Wetterau releases a new book.