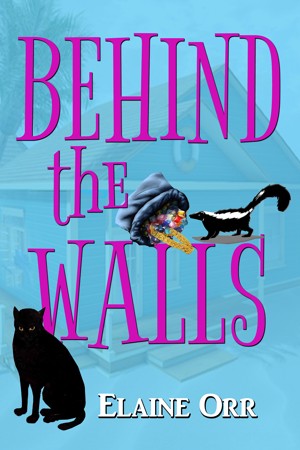 By Elaine L. Orr
Rated 5.00/5 based on 1 reviews
Behind the Walls was a finalist in the 2014 Mystery and Mayhem Awards, sponsored by Chanticleer Book Reviews! Something was hidden behind the walls of the Jersey shore house Jolie bought. Something someone seems willing to kill for. A purse thief and a burglar pursue Jolie, but she’s most worried about the body on her porch swing. More
There’s something hidden behind the walls of the hurricane damaged house Jolie bought in her New Jersey beach town. Something someone seems willing to kill for. After Jolie and Scoobie find a small sack of jewelry as they do a mold attack on her bungalow, Jolie is pursued by a purse thief and a burglar. But the guy she’s most worried about is the one who left an elderly auctioneer dead on her porch swing. In between appraising houses and planning a fundraiser for the food pantry (can you say liquid string contest?), Jolie tries to figure out if there is more stolen bounty around town. Is the feared killer the same person who burned some vacant houses, or the as-yet unmasked Peeping Tom? And are they willing to kill again to get to the hidden riches?

Her friends and local police warn her to butt out, but that’s just encouragement for a woman who likes to get to the bottom of things. Jolie wrestles with fear as she tries to get her cat, Jazz, to feel at home in the new house. Maybe an unexpected visitor can be a substitute for Aunt Madge’s golden retrievers.

Elaine L. Orr writes three mystery series, including the eleven-book Jolie Gentil cozy mystery series. Behind the Walls was a finalist for the 2014 Chanticleer Mystery and Mayhem Awards. The first book in her River's Edge series, From Newsprint to Footprints, came out in late 2015, and the Logland series began with Tip a Hat to Murder in 2016. Demise of a Devious Neighbor, the second River's Edge book, was a Chanticleer finalist in 2017. She also writes plays and novellas, including the one-act play, Common Ground published in 2015.

Her novella, Falling into Place, tells the story of a family managing the results of an Iowa father’s World War II experience with humor and grace. Another novella, Biding Time, was one of five finalists in the National Press Club's first fiction contest, in 1993. In the Shadow of Light is the fictional story of children separated from their mother at the US/Mexico border. Elaine conducts presentations and teaches online classes on book publishing and other writing-related topics. Nonfiction includes Writing in Retirement: Putting New Year's Resolutions to Work, and Words to Write By: Getting Your Thoughts on Paper.She graduated from the University of Dayton and the American University. A member of Sisters in Crime, Elaine grew up in Maryland and moved to the Midwest in 1994.

Her fiction and nonfiction are at all online retailers in all formats -- ebooks, paperbacks, large print, and (on Amazon, itunes, and Audible.com) audio in digital form. Support your local bookstore!

These Jersey shore mysteries mix murder with a compassionate group of friends and a good bit of humor. 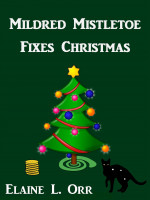 This a new author for me and a good one. The characters seem so real I already identified with them. Restoring her cottage Jolie and Scoobie finds a bag of jewelry. Jolie begins to look into the history of the house trying located the owners of gems. Stranges things begin to happen culminating with a dead man on her porch. One is an addition of Pebbles to the family to keep Jazz from being lonely.Vacant houses are burning and arson is suspected. The peeping tom is still around. I will read more by this author.

You have subscribed to alerts for Elaine L. Orr.

You have been added to Elaine L. Orr's favorite list.

You can also sign-up to receive email notifications whenever Elaine L. Orr releases a new book.