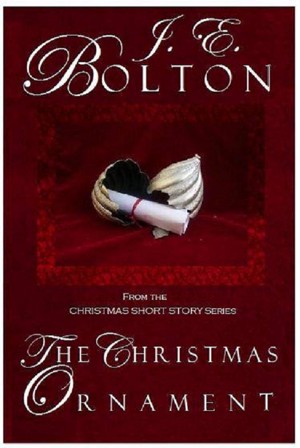 By J.E. Bolton
Rated 2.00/5 based on 1 reviews
What happens when a century-old ornament breaks one Christmas Eve, and its mysterious contents reveal a shocking, dark family secret?

One young man's devastation learning about the horrible secret and his own unhappiness drives him to the end of his rope. But one visit to the local cemetery in order to battle his inner demons and confront his family's dark heritage will change his life forever. More
What happens when a century-old ornament breaks one Christmas Eve, and its mysterious contents reveal a shocking, dark family secret?

Marcus Morgan hasn't been home for Christmas in years, and there's a reason,
His devastation learning about the horrible family secret and his own unhappiness drives him to the end of his rope. But one visit to the local cemetery in order to battle his inner demons and confront his family's dark heritage will change his life forever.

J.E. BOLTON was born on September 19, 1977 in LaFollette, Tennessee and was named Jason Eugene Bolton. Being the oldest of four children as well as the son of an independent contractor and a nurse, Bolton started writing at the age of twelve and often sat in his bedroom for hours filling several notebooks with short stories and poems. At the age of fifteen, he published his first poem, “The Lighthouse” which went on to gain over twenty honors and independent literary awards. He graduated from Campbell County High School in 1996 and excelled greatly in college-level English and Journalism courses, and was even part of both his middle and high school newspaper staffs. By the age of 19, Bolton completed two anthology compilations of his own work.

At the age of 24, Bolton got his first real break by publishing a weekly column in the Jellico Advance-Sentinnel called “Shades of Grace” under the pseudonym Jason St. James. He is also credits author and book editor Michael Garrett, who has also worked with best-selling authors Stephen King and Joyce Carol Oates, as being his first book editor.

Bolton describes himself as a very driven person when it comes to writing and life: “You can neither be afraid of failure nor the harshness of your critics. I like to think of myself as a writer who’s in it to give my readers hope even in their darkest of situations.” Bolton bases his life and living on a quote by T. E. Lawrence which states: “All men dream, but not equally. Those who dare to dream by night from the dusty recesses of their minds wake in the day to find that it was all vanity. But the dreamers of the day are but dangerous men. For they may act upon their dreams with eyes wide open and make it possible.”

Bolton also had the honor of being the youngest person ever nominated for the Crystal Pen Lifetime Achievement Award by the Appalachia East Writers Association. By the age of 25, Bolton garnered a total of over fifty honors and awards in the field of writing and poetry, and has also been published in numerous publications and international anthologies.

Bolton and his family currently reside in East Tennessee.

Another idea of a Christmas reawakening, but it feels empty and confusing. I’m not sure how one piece of paper (a deed) revealed the deceased had a dark past.

You have subscribed to alerts for J.E. Bolton.

You have been added to J.E. Bolton's favorite list.

You can also sign-up to receive email notifications whenever J.E. Bolton releases a new book.