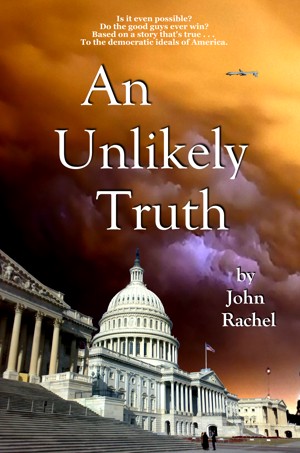 By John Rachel
It was a time of stalemate, gridlock, divisiveness, and polarization. The nation plunged into greater crisis and dysfunction as the list of things which weren't getting done grew longer. The survival of democracy and America itself were increasingly in doubt.

This is the inspiring story of a small committed group of activists who either never knew or forgot the meaning of the word 'impossible'. More
Martin Truth wasn’t just an underdog. He was an invisible dog. A practically non-existent dog.

This was his fourth run for U.S. Congress representing Ohio’s 3rd District, which included Dayton, Ohio, home of Wright-Patterson Air Force Base, and a lot of Republican farmland. His main opponent, GOP pretty boy Matt Gardner, was a sixth-term incumbent, ex-military, slick, patriotic, arrogant, always smiling and full of hot air, which voters sucked in with steadfast loyalty. The only question this time around seemed to be how big his landslide victory would be.

Things looked really bad for Martin. His fiancé and girlfriend of eight years left him. His 9-to-5 job rendered him a zombie. His campaign was broke and as the Green Party candidate, he wasn’t even on the radar screen of 99% of the voting public. His chances of winning the election appeared to be less than zero.

Then a way to turn everything around arrived in a most unexpected form.

Jamila Parks was an African-American grad student from Rutgers University. She joined Martin’s campaign on a practical internship required to complete her masters program in political science. Jamila had the face and body of pop music star Rihanna, and the IQ of Albert Einstein. She brought with her a unique and untested campaign strategy which had been work-shopped in a graduate seminar at Rutgers. It had been precisely designed to take on the likes of smooth-talking, two-faced toadies like Martin’s nemesis, Congressman Gardner.

How effectively it would play out in this election remained to be seen. But one thing was certain.

Politics in America would never be the same.

John Rachel has a B. A. in Philosophy, has traveled extensively, is a songwriter, music producer, novelist, and an evolutionary humanist. Since 2008, when he first embarked on his career as a novelist, he has had eight fiction and three non-fiction books published. These range from three satires and a coming-of-age trilogy, to a political drama and now a crime thriller. The three non-fiction works were also political, his attempt to address the crisis of democracy and pandemic corruption in the governing institutions of America.

With the publication of his most recent novel Petrocelli, a gruesome story about human trafficking for prostitution, and The Peace Dividend, a political strategy for curing America of its addiction to war, he has three more novels in the pipeline: Love Connection, a drug-trafficking thriller set in Japan; Sex, Lies and Coffee Beans, a spoof on the self-help crazes of the 80s and 90s; and finally, The Last Giraffe, an anthropological drama and love story involving both the worship and devouring of giraffes. It deliciously unfolds in 19th Century sub-Saharan Africa.

The author’s last permanent residence in America was Portland, Oregon where he had a state-of-the-art ProTools recording studio, music production house, a radio promotion and music publishing company. He recorded and produced several artists in the Pacific Northwest, releasing and promoting their music on radio across America and overseas.

John Rachel now lives in a quiet, traditional, rural Japanese community, where he sets his non-existent watch by the thrice-daily ringing of temple bells, at a local Shinto shrine.

An Unlikely Truth (Official Book Trailer)
OFFICIAL BOOK TRAILER: In this political drama, a bright, young, idealistic, Green Party candidate, in his bid for the congressional seat of a very conservative district in Ohio, teams with a beautiful, fiery African-American intern to combat the slick deceptions and ruthless tactics of a sweet-talking right wing incumbent.

You have subscribed to alerts for John Rachel.

You have been added to John Rachel's favorite list.

You can also sign-up to receive email notifications whenever John Rachel releases a new book.