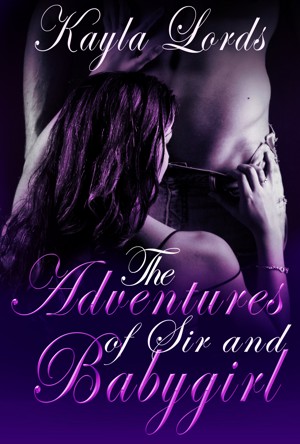 The Adventures of Sir and Babygirl

Rated 3.50/5 based on 2 reviews
Katie, a blogger recovering from a broken heart, has sworn off relationships, even though she misses being the babygirl to a strong Dominant man. Afraid to make another connection, she hides behind her blog.

Johnathan knows he’s no Dominant without a submissive. A few conversations with Katie, and he thinks he may have found the woman he needs and craves. More
Katie, a blogger recovering from a broken heart, has sworn off relationships, even though she misses being the babygirl to a strong Dominant man. Afraid to make another connection, she hides behind her blog.

Johnathan knows he’s no Dominant without a submissive. A few conversations with Katie, and he thinks he may have found the woman he needs and craves.

Will Katie and Johnathan find what they need in each other? Can they become Sir and Babygirl?

Now instead of experiencing sexual daydreams, she writes them down and publishes them for others to enjoy. An avid blogger, tweeter, and talker, Kayla enjoys interacting with her readers.

Also in Series: The Adventures of Sir and Babygirl

Reviews of The Adventures of Sir and Babygirl by Kayla Lords

The story line is good. There are some issue in my opinion with the transfer from one chapter to the next. Details of how the relationship progressed are missing. At the end of one chapter they are together kind of, but she is still really nervous and by early into the next chapter the relationship has seriously progressed. I liked the story I just missed some of the details on how they got from point A to point B.

The Adventure of Sir & Babygirl to give an honest review that I will post to Amazon as well as Goodreads. It will be added to my blog for any blog tour going of the book at this time.

For those 18 +
Katie is a divorced mother of a four year old girl whose name is Olivia. She also has a personal blog that where she writes all kinds of BDMD for the past two years along with her normal job. Katie has no problem expressing her desires on her blog but when it comes to real life situations she has low self-esteem. This was all brought on by her ex-husband who was a really awful man.
Katie has a local coffee shop that she spends so much time that everyone that works there greats here with her coffee order before she even has to say anything. She also sits in the same spot and work on reading post from different people before heading home from work. Another thing that really gets to Katie is the beautiful young blonde barista that works behind the counter. Her body to Katie if perfect as she has never had a kid and everything is still where is should be.
She gets a message from someone and for some reason it really gets to her and she doesn’t understand why. Not in a bad way it’s like she feels something different but also has her guard up as well. With her daughter sending the night with her father Katie decides she is going to just have a Disney movie, Mr. Teddy, ice cream and pizza night. She remembers she has the email she needs to reply to but just puts it off to the side and wait until later on.
Katie gets up and goes to bed and it’s early in the morning when she decided to reply back to Johnathan E. She tells him that its fine that he emailed her because she left her email for people to use.
Johnathan E.
Is a father of two twin boys whose sister moved in to help him take care of after his divorce. He has been following Little K Girl (Katie) blog since she first started. He really likes reading her blog and has become attracted to her just from reading it. From reading it for so long he learns that he ex was a major ass and that she has a lot of issues that he would love to help her get over. His phone DINGS and it’s a reply from Little K Girl. He reads it and is excited to hear back from her. He is also in the BDMS as well as Katie but doesn’t want to push anything with Katie. They exchange email for a while but Katie has such low self-esteem she is always trying to push him out of her life.

There is so much more exciting stuff that happens between Katie and Johnathan that if you like reading BDMS you need to pick up this book for sure.

You have subscribed to alerts for Kayla Lords.

You have been added to Kayla Lords's favorite list.

You can also sign-up to receive email notifications whenever Kayla Lords releases a new book.