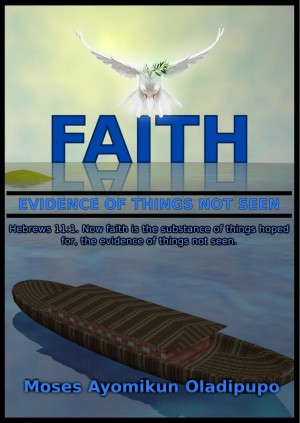 Faith:The Evidence of Things Not Seen

By Moses Ayomikun Oladipupo
A book on the subject of God directed to a world of doubters. It seeks to give answers to some questions about God. It also talks on how to be saved. More
Faith is a book seeking to prove the existence of God. Apart from this, the very important question, who then is God, that automatically follows is here answered.

The importance of the question as to whether or not God exists cannot be over emphasised. It is therefore imparative to seek to know him and follow him. This book seeks helps the doubter, confused, and/or seeking man to find his God.
Download: epub mobi (Kindle) pdf more Online Reader
rtf lrf pdb txt
Price: Free! USD
Add to Library
Create Widget
Tags: god faith evidence
About Moses Ayomikun Oladipupo

He is an ardent lover of hymns and classic music especially those of Handel, J.S. Bach, Mozart, Beethoven, Pachelbel. He had a dream of becoming a footballer as a teenager, a dream which he now considers farfetched. He still finds time once in a while to play football with friends. He therefore enjoys playing football, watching football, and playing football games especially Pro Evolution Soccer.

Most of his free time is spent reading books from a wide range genre, whether it is history, Christian, stories, etc. He enjoys reading while on transit. While on transit, he puts an ear-piece in his ears, and listening to a silent music drowns the noise and is soon surrounded by the scenes of his novel.

He is the author of a number of books with many others yet to be published. His Christian convictions forms a major bulk of his writings. Apart from his books, he has written several articles. Visit his website; www.ayomikun.com.ng.

You have subscribed to alerts for Moses Ayomikun Oladipupo.

You have been added to Moses Ayomikun Oladipupo's favorite list.

You can also sign-up to receive email notifications whenever Moses Ayomikun Oladipupo releases a new book.